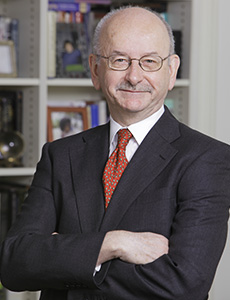 So why would you want to listen to this Jim Jubak guy?

For the same reason you want to go hunting with an old dog who’s been out in the field in all kinds of weather and still lives for the chase.

Jim made his first personal investment in the early 1980s when zero coupon Treasury bonds were paying 12%. (Unfortunately, this opportunity followed a not terribly lucrative period earning a Ph.D. in English from the University of Virginia. Jim’s lack of capital to invest at 12% insured that he wouldn’t retire by the age of thirty-five.)

As a financial journalist for Venture and Worth Jim covered the boom of the 1980s and the crash of 1987. In the early 1990s he wrote the first comprehensive book, The Worth Guide to Electronic Investing, about what was then a new effort to put computers to work for individual investors.

But that wasn’t enough punishment for Jim, oh no.

Beginning in 1997 and continuing for twelve years he wrote one of the first and ultimately the best-read stock picking columns on the Internet, “Jubak’s Journal,” for Microsoft’s MSN Money. His initial boss, a hotshot software guy, said: “If you’re so good as a stock picker why don’t you do what no one else does and issue clear buys and sells and then track the results.” That resulted in what we believe was the first online, daily-priced stock portfolio on the Internet, Jubak’s Picks. And that portfolio begat a dividend portfolio and then a long-term global stock portfolio called the 50 Best Stocks in the World.

That last portfolio was the inspiration for Jim’s 2008 book The Jubak Picks: 50 Stocks That Will Rebuild Your Wealth & Safeguard Your Future. In May 2009 Jim left MSN Money to start his own stock picking blog, JubakPicks.com, so that instead of writing two columns a week he could write three posts a day.

That was followed in June 2010 by the launch of a mutual fund, the Jubak Global Equity Fund, and the Jubak Asset Management (JAM) daily Internet investment letter.

That mutual fund was shut down in 2014. The newsletter continues. And in fact was joined by a new newsletter Juggling with Knives in 2016. That newsletter is based on Jim’s February 2016 book Jugging With Knives: Smart Investing in the Coming Age of Volatility. The portfolio derived from that book, The Volatility Portfolio, was up 53% in 2017. At the end of 2017 Jim added a final portfolio to the JubakAM and Juggling With Knives sites the Perfect 5 ETF Portfolio. The original Jubak Picks Portfolio was up 483% as of the end of 2017. The 50 Stocks Portfolio was up 28.1% in 2017 after returning 21.5% in 2016.

Some dogs just love to hunt.

A selection of his posts for JubakPicks.com won the 2009 Best in Business award from the Society of American Business Editors and Writers (SABEW). In 2016 Juggling With Knives was picked by The Stock Trader’s Almanac as the best investing book of the year.

Here's What You Get With a JAM Subscription