Powell was very clear, but he didn’t add clarity on Fed intentions

In a speech today Federal Reserve Chair Jerome Powell clearly confirmed what other Fed officials have said this week: 1. The Fed will raise interest rates at its December 14 meeting by 50 basis points and not 75. That would follow on four straight 75 basis point interest rate increases. 2. The Fed will moderate the pace of its interest rate increases going forward. 3. The peak for the Fed’s benchmark interest rate will be “somewhat higher” than estimated in September. The Fed’s estimate in September was for a peak of 4.6% in 2023. The current benchmark rate is 3.75% to 4.00%. The Fed Funds futures market sees rates peaking at about 5% in the second quarter of 2023. What he didn’t clarify is what that peak rate might be or when the financial markets might see it. 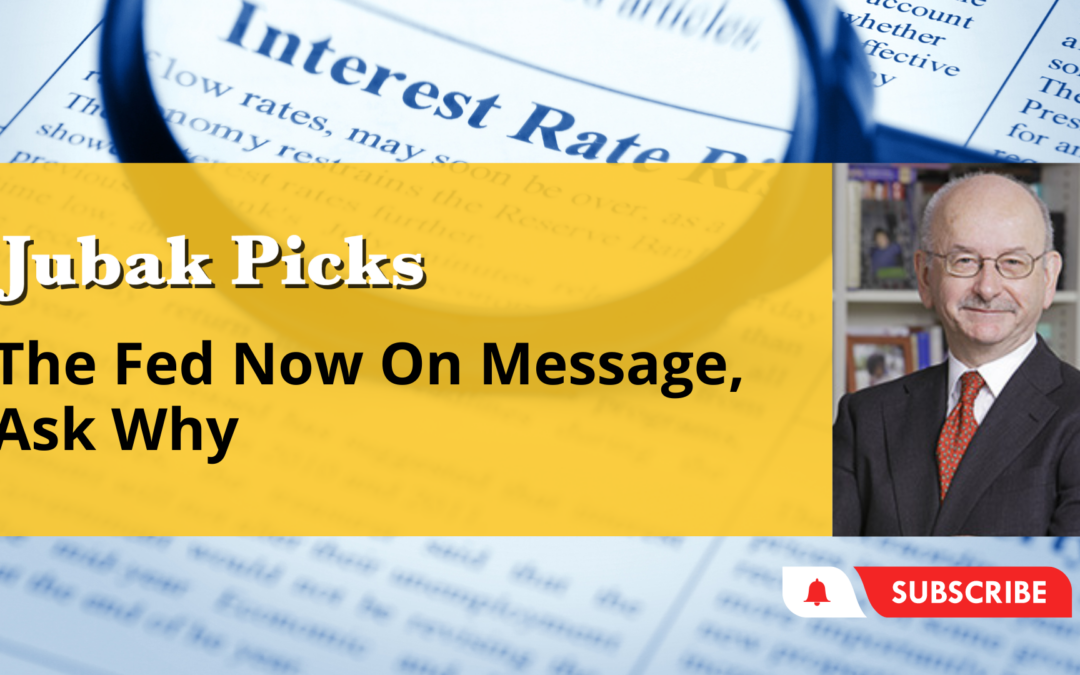 Please Watch My New YouTube Video: The Fed Is Now On Message–Ask Why

Today I posted my two-hundred-and-eleventh YouTube video: The Fed Is Now On Message–Ask Why Today’s topic: The Fed is Now On Message, Ask Why. Last week I spoke about how confusing the Fed’s messaging had been recently, but this week, everybody has been on the same page. St. Louis Fed President, James Bullard, a fairly aggressive inflation fighter, suggested we need to take the Fed rate up to 5-7%, a hike from the current 3.75-4%. Loretta Mester, President of the Fed in Cleveland, agreed that the Fed isn’t near a pivot and John Williams, President of the New York Fed, came out with a detailed statement saying that more work is needed on inflation and unemployment may need to rise to 4.5-5% by the end of 2023. While Williams didn’t use the word, “recession,” it’s clear that you don’t reach those unemployment numbers without hitting a recession. So, why are these formerly out-of-sync Fed presidents suddenly aligned on message? The Fed is data-driven, and Fed members got new inflation and jobs numbers recently before the public release Thursday and Friday. Could be that these new data points have driven the Fed to the conclusion that we shouldn’t expect a pivot any time soon. Or maybe it’s just that the Fed goes into its quiet period soon before the December 14 meeting.

Economists surveyed by FactSet forecast that the November jobs report, set for release Friday morning, will show that the economy added 220,000 new jobs in the month. And that the unemployment rate ticked higher to 3.8% from 3.7% in October If that forecast is correct, it would, probably, be enough to keep Wall Street convinced that the Federal Reserve will raise interest rates by only 50 basis points at its December 14 meeting and that the U.S. central bank is on track to wind down this cycle of interest rate increases in early 2023. 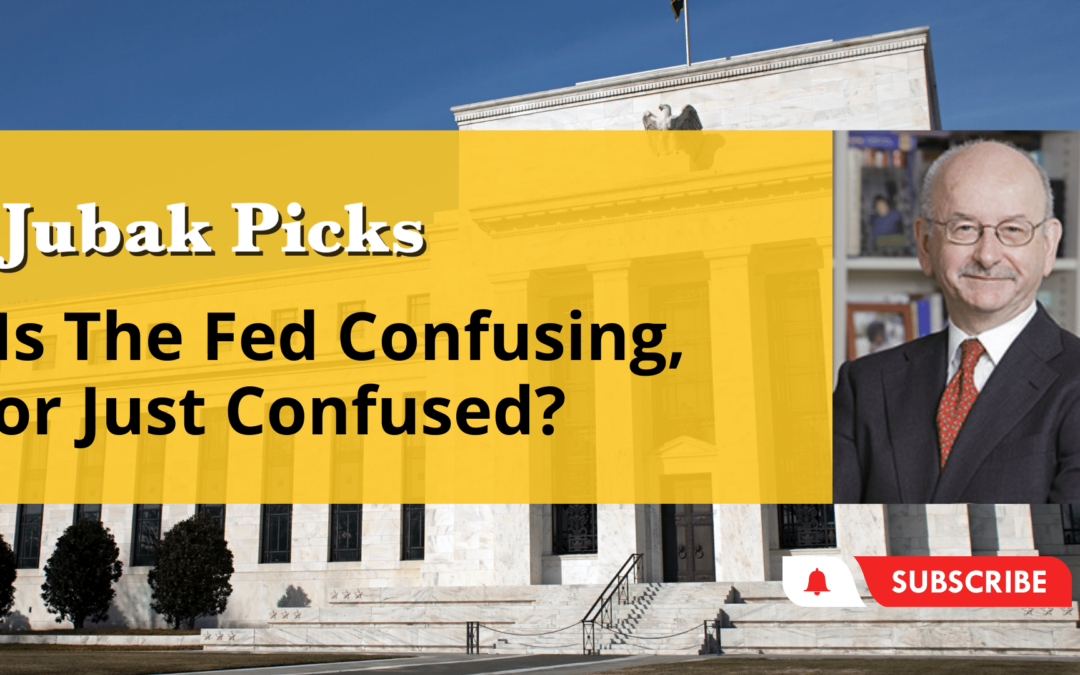 Please Watch My New YouTube Video: Is the Fed Confusing or Just Confused?

Today I posted my two-hundred-and-ninth YouTube video: Is the Fed Confusing or Just Confused? Today’s topic: Is The Fed Confusing, or Just Confused? First, Mary Daly, president of the San Francisco Fed came out with a very mixed message about the Fed’s December 14 meeting. The market seems to have decided that the Fed will raise rates by just 50 basis points, she said, but that it’s still too early to decide and a 75 basis-points increase is still on the table. But, she then added, the Fed is worried about overcorrecting and causing a recession. Then, Loretta Mester, president of the Cleveland Fed, announced that she is open to slowing the rate of the rate hikes, but was unclear on what “slowing” would actually mean. I think the key to market direction after the December meeting is the Dot Plot Summary of Economic Projections. The last time the Fed released a Dot Plot was September and it’s already wildly out of date. The September projected inflation rate for 2023 was 2.6-3.5% and 5.3-5.7% for 2022. Both projections will likely be revised higher in December. Inflation isn’t coming down as fast as the Fed thought in September, but it is coming down. Big question for the financial markets, though: Is it coming down enough? Rate hikes of 50 or 75 basis points are on the table but does the Fed now think it can stop raising the rates? My conclusion is that the Fed sounds confusing because the Fed is actually confused.

The hits keep coming. Today, November 17, St. Louis Fed president James Bullard took the lead. Bullard called for raising rates to at least 5.00%-5.25%, which he called the “minimum level” to be “sufficiently restrictive.” During Bullard’s presentation, he showed charts indicating rates will need to be 5.00%-7.00% to curb inflation.

Is the Federal Reserve now in the business of talking down stock prices? It sure looked like it today.

Odds jump in favor of rally through end of the year

After Thursday’s CPI inflation report, stocks have a clear path to move higher in a strong rally through the end of the year. Critically, the October inflation report, which showed inflation falling slightly more than expected, gives Wall Street the data it needs to sustain its favorite rally story: Inflation has peaked and is heading down. Which means the Federal Reserve will soon pause its policy of increasing interest rates early in 2023 and pivot to cutting interest rates by the middle of the year. You could see that story at work in the huge jump in Treasury prices and the huge drop in yields. The yield on the 10-year Treasury fell 23 basis points to just 3.86% on Thursday That’s a huge move–and deeply significant–considering that the yield on the 10-yer bond was above 4%, at 4.21% on Monday, November 7.

Not what the market wanted to hear from the Fed today

At first investors and traders thought they heard the Federal Reserve signal that the central bank was thinking about a pivot to a policy of cutting interest rates. And stocks rallied. But then Fed chair Jerome Powell “clarified” the Fed’s thinking in his post-meeting press conference. It would be “premature,” Powell said, to think about pausing the Fed’s policy of increasing interest rates to fight inflation. The Fed, he added still had a “ways to go” and the “Ultimate level of interest rate will be higher than previously expected.” Powell stressed that the Fed’s goal continues to be a reduction in inflation and that the Fed is surprised at how sticky prices are and that inflation hasn’t given up more ground to the Fed’s six interest rate increases in 2022.

The JOLTS survey from the Department of Labor showed a big jump in job openings in September. Which raised market worries that the Fed will raise interest rates tomorrow, November 2, by a hefty 75 basis points and signal that it is farther away from a pivot toward lowering interest rates than this recent rally has hoped. The Job Openings and Labor Turnover Survey showed that the number of available positions climbed to 10.7 million in September from a revised 10.3 million in August. Economists surveyed by Bloomberg were looking for a drop to 9.8 million openings.

Ya Gotta Believe! Wall Street keeps pumping its view that Fed interest rate shift is sooner rather than later

Today, Monday, October 31, it’s Morgan Stanley strategist Michael Wilson, who until recently was a Bear, joining the “the Fed is about to pause or end its interest rate increases” camp. Indicators including the inversion of the yield curve between 10-year and three-month Treasuries “all support a Fed pivot sooner rather than later,” Wilson wrote to clients today. “Therefore, this week’s Fed meeting is critical for the rally to continue, pause or even end completely.”
The Fed is widely expected to raise its short-term benchmark interest rate by 75 basis points–to a range of 3.75% to 4.00%–at its Wednesday meeting. The CEM FedWatch Tool, which uses prices in the Fed Funds Futures market to calculate the odds of a Fed move, put the odds of a 75 basis point increase at 86% today, up from 82.2% on Friday. The remaining sentiment is betting on a 50 basis point increase. No one is expecting just a 25 basis point increase.

Inflation as measured by the Personal Consumption Expenditures index, the Federal Reserve’s favorite inflation guide, rose at an annual rate of 6.2% in September, according to data released today, October 28. The core index, which excludes more volatile prices for food and energy, rose at an annual rate of 5.1%. The month-to-month gain in the overall PCE was 0.3% and the core index climbed a month-to-month 0.5%.