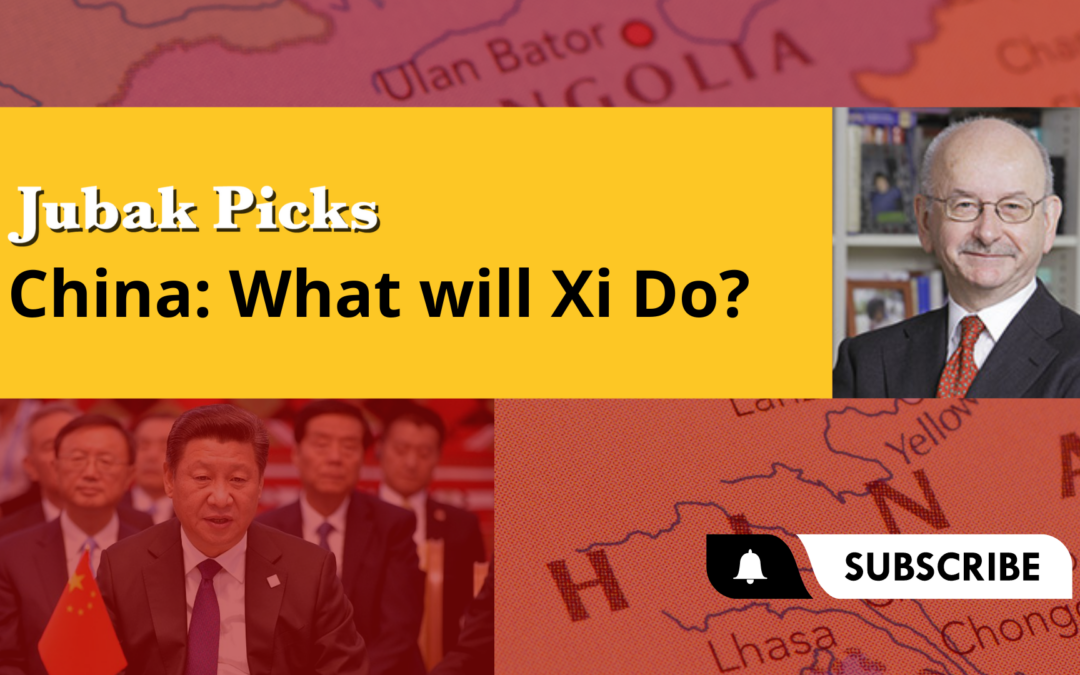 Please Watch My New YouTube Video: What Will Xi Do Now?

Today I posted my one-hundred-ninety-seventh YouTube video: What will Xi do now Sunday, Xi Jinping was officially elevated to his third term as President of China. While his title is officially “President,” the position is truthfully more like Mao’s “Supreme Leader” with little room for dissent from the left and the pledge that XiJinping thought is the path to China’s future. However, one day following his installation, Xi received a slap in the face from the markets- Chinese stocks traded in Hong Kong (by mostly foreign investors) plunged. China Large-Cap ETF (NYSEARCA: FXI) was down almost 10% on Monday, with Alibaba (NYSE: BABA) down nearly 12.5%. Meituan (OTCMKTS: MPNG) down 15.25%, and Tencent (OTCMKTS: TCEHY) off 14%. Foreign investors sold on a belief that now there’s no end to Xi’s no-Covid policy (which has essentially cut Chinese economic growth in half.) Whatever fears they had were echoed by Monday’s economic report of just 3.9% year-over-year growth in China’s GDP–a far cry from the government’s target of 5.5%. The question is, what will Xi do about it? He may very likely take an approach that brushes off foreign investors and sticks to his policies. Now that the National Congress is over he also can be expected to retaliate against U.S. restrictions on advanced technology sales. And then, of course, there’s Taiwan where “reunifying” Taiwan with the People’s Republic would be a guarantee of Xi’s legacy. The Biden administration has stated it expects Xi to take action soon and Xi, himself, made it a focus of his “acceptance speech.” With all this potentially coming in the next few weeks, I don’t think this is a time to stock up on Chinese stocks. 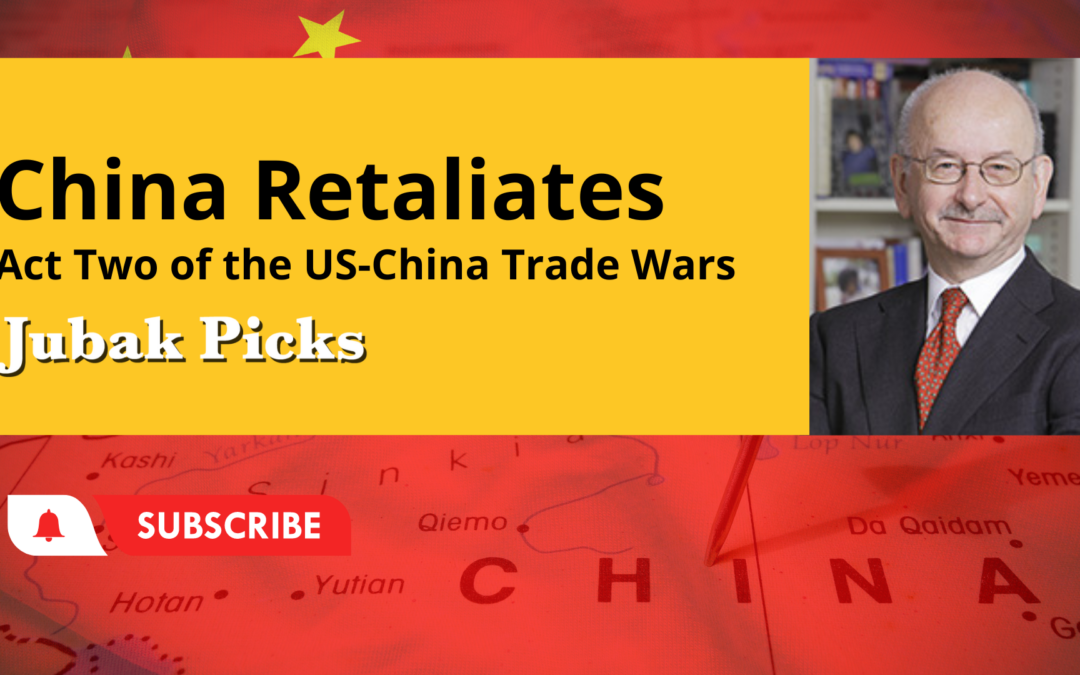 Today I posted by one-hundred-ninety-fourth YouTube video: China Retaliates, Act 2 of the U.S./China trade war. The National Congress of the Chinese Communist Party has rubber-stamped a third term as president for Xi Jinping–a move that required amending the Chinese constitution. Because of his age, this is likely his last term–a legacy term. Legacy terms can be dangerous in states dominated by Great Leaders because these leaders are looking to make big moves and lasting changes to secure their place in history. During this “transition,” there has been a delay in China’s response to U.S. trade restrictions, but that’s likely to change now and I expect a very strong response from the Chinese government. In the next few weeks, we can expect to see retaliation in the technology sector: rare earth minerals and refined lithium. China controls 90% of the world’s rare earth supply as well as processing for that supply. Restrictions on the exports of that material to the U.S. have been very effective in the past and extremely damaging to US technology companies. The second move, I think, will be market moves to restrict access by U.S. companies to the Chinese economy. Companies like Tesla and Apple and other big U.S. actors in China can expect harsh restrictions. The third one is a real wildcard: what happens with Taiwan? Xi’s recent speech to the National Congress was very aggressive about the Chinese government’s claim that Taiwan needs to be quickly reintegrated into China. Xi has a somewhat similar problem as that of Vladimir Putin: he has created an extreme hardcore right wing, which is putting pressure on him to be more aggressive. So, he’s going to make a move and however he moves, it will rattle the financial markets. That’s the Chinese agenda for the next four weeks or so and it makes me very hesitant about putting money into technology stocks. Additionally, look to cut risk in Apple, Tesla, and Taiwan Semiconductor Manufacturing.

I hate to do this. Taiwan Semiconductor Manufacturing (TSM) is the premier chip manufacturer in the world and I see the company continuing to grow revenue from the increasing demand for smaller and more powerful chips. And I certainly hate to sell a stock that’s down 46% for the year to date as of the close on October 18. Under ordinary circumstances, I would hold on and ride out the current slump in the semiconductor cycle. After all, we’ve been here before, right? Except that the U.S.-China trade war and the possibility that China will look for a confrontation over Taiwan make the current circumstances anything but “ordinary.”

On Monday on my subscription JubakAM.com site, I made Lynas Rare Earths (LYSDY) the eighth pick in my Special Report: 9 Picks to Make Money in This Bear Market and said that I would add it to the Jubak Picks Portfolio today. This is what I wrote in my Special Report: “This isn’t a Fed pick, an economic growth pick, or a Bear Market bottom pick. It’s a straightforward U.S.-China trade war pick

Selling Tesla tomorrow out of the Volatility Portfolio on China slowdown and trade war uncertainties.

Even before the Biden administration launched a new U.S./China trade war by imposing restrictions on U.S. exports of advanced chip technology, Tesla (TSLA) was facing a sales slowdown in China. Now, with what I regard as the near certainty that Tesla will be one of the choice targets in any Chinese retaliation, I think it’s time to sell Tesla and get out of the way of what looks like a truly nasty tit-for-tat war of sanctions and restrictions. Tomorrow, October 12, I’m selling Tesla out of my Volatility Portfolio with a loss of 63.74% since I added it to the portfolio on November 10, 2021, near what would turn out to be the high before the onset of today’s Bear Market for technology stocks.

Today I’m selling ASML Holding (ASML) out of my long-term 50 Stocks Portfolio. My take on Asmel hasn’t changed: this is one of the key chip equipment companies in the drive to produce smaller and denser chips. What has changed in the market and the global economy. I think that technology, and especially chip stocks, are in a downtrend that has a lot longer to run. And that recent U.S. restrictions on advanced chip technology exports to China will set off a trade war that will come down heavily on companies such as ASML.

... Wall Street to be hanging on the words of a Thursday, August 27 speech. Not the one that night where Donald Trump accepts the Republican Party nomination for President. That's unlikely to offer any surprises to the stock market. Instead the key speech that day is...

China has told state-owned companies to halt purchases of soybeans and pork from the United States in response to President Donald Trump's announcement that his administration would begin the process of eliminating Hong Kong's special trade status. Chinese importers...

Even after yesterday’s rip-roaring gains, the S&P 500 is stuck–so what comes next?

...China fireworks. We ended last week with the Commerce Department slapping new restrictions on the sale of any chip made with U.S. semiconductor manufacturing equipment to China's Huawei Technologies. (Which means that Taiwan Semiconductor Manuacturing's plans to...

This round of U.S.-China trade war is still just words–so far

With a China trade truce in place, the U.S.-European trade war moves to front burner

Well, that certainly didn't take long. With the ink barely dry on the Part 1 trade agreement between the United States and China, the European Union said that the deal could violate the rules of the World Trade Organization. EU Trade Commissioner Phil Hogan said his...
« Older Entries