Do the huge January job gains mean that the Federal Reserve will raise interest rates to a higher peak? That was the worry today and it was enough to send the Standard & Poor’s 500 0.61% lower at the close and to knock a solid 1% off the NASDAQ Composite. The NASDAQ 100 fell 0.87% and the small-cap Russell 2000 lost 1.40%.

Will Powell take it all back on Tuesday?

Was it accidental or intentional? We’ll find out on Tuesday when Fed chair Jerome Powell answers questions at the Economics Club in Washington. On Wednesday, February 1, in his post-Fed-meeting remarks, Powell came across as more dovish on inflation and interest rates than many Wall Street strategists and the financial markets had expected.

Today, Friday, February 3, the Bureau of Labor Statistics reported that the U.S. economy added a whopping 517,000 jobs in January. Economists had been expecting more along the lines f 50,000 jobs added in the month. The huge January surge took the headline unemployment rate to 3.4% The last time the unemployment rate was this low was May 1969. On the surface, the stronger, the much stronger, than expected job gain in January will put pressure on the Federal Reserve to continue raising interest rates. If the labor market is booming, it’s hard o see inflation coming down rapidly. But the real story here may be beneath the surface.

Fed raises interest rates by 25 basis points as expected; market convinces itself that the Fed is talking “Pause soon”

The Federal Reserve raised short-term interest rates Wednesday by 25 basis points, as expected. That brings the Fed’s benchmark interest rate to a range of 4.50% to 4.75%, the highest level since October 2007. After a pullback on the news and the Fed’s press release, the stock market advanced because in his press conference Fed chair Jerome Powell didn’t strongly push back on questions suggesting that the Fed sees inflation continuing to fall and that the central bank is nearing a pause in its interest rate increases. If you’re familiar with the way that financial markets torture the Fed’s frequently opaque language to support the current consensus, you won’t be surprised that today’s move up on stocks is based on a very minor shift in the Fed’s language.

With the Federal Reserve seemingly winding down its cycle of interest rate increases, a stronger dollar is no longer the big currency market story. Gold is. Gold is back. And for at least the next 3 to 6 months.

Sell any post-Fed rally–stocks are way ahead of themselves on the Fed, interest rates, and inflation

Here’s what I expect on Wednesday. The Federal Reserve’s Open Market Committee will announce a 25 basis point interest rate increase. In his post-meeting press conference Fed chair Jerome Powell will try to talk the financial markets out of their exuberance by stressing that the Fed doesn’t see a quick end to interest rate increases because at 5% inflation is still running way ahead of the Fed’s 2% target rate. And I expect that investors and traders will ignore Powell’s comments and bid stocks high because a pause in rate increases is just around the corner–maybe as early as March–and financial markets can look for the Fed to begin cutting interest rates in the second half of the year. To which I say, Bushwah! I would sell any post-meeting rally. March increasingly looks like the month where reality will whack the markets on its head.

I expect Federal Reserve to raise interest rates by 25 basis points on Wednesday, February 1. As of Friday, everybody from Elon Musk to my Amish egg guy thinks the Fed will raise rates by 25 basis points instead of the 50 basis points at the Fed’s December meeting. A 25 basis point move would, the consensus thinking goes, pave the way to a March end to this cycle of interest rate increases. And with a pause in effect, can a pivot to interest rate cuts by far behind? (I think this is very wishful thinking, but reality has never stopped a rally before.) On Friday, the CME FedWatch tool, which calculates the odds of a Fed move by looking at prices in the Fed Funds futures market, put the odds of a 25 basis point increase by 98.4%. No one, I repeat, no one was putting money on a 50 basis point move. The remaining 1.6% of the market was looking for the Fed to hold rates steady–in other words no interest rate increase. (I think even this tiny percentage might simply be an artifact of a few traders speculating on a big market reaction to a 25 basis point increase.)

So here’s what I think happens before and after the news.

U.S. economy shows solid 2.9% growth in the fourth quarter, but…

The U.S. economy grew at a 2.9% annual rate in the December quarter of 2022. That brought growth for 2022 as a whole to 2.1%. Consumer spending was strong enough to offset slowdowns in housing and manufacturing. So good news. But growth in the quarter was still slower than the 3.2% growth rate in the third quarter

Economy down but stocks up? Remember that the economy doesn’t equal the stock market

This may seem perplexing: Alphabet (AKA Google) announced that it would cut 12,000 jobs just days after Microsoft (MSFT) said it would cut 10,000 jobs. And stocks, especially technology stocks, rallied. The Standard & Poor’s 500 closed up 1.89% today and the Dow Jones Industrial Average ended the day up an even 1.00%. The technology-heavy NASDAQ Composite finished up 2.66% and the NASDAQ 100 wound up climbing 2.86%. But remember that the economy doesn’t equal the stock market 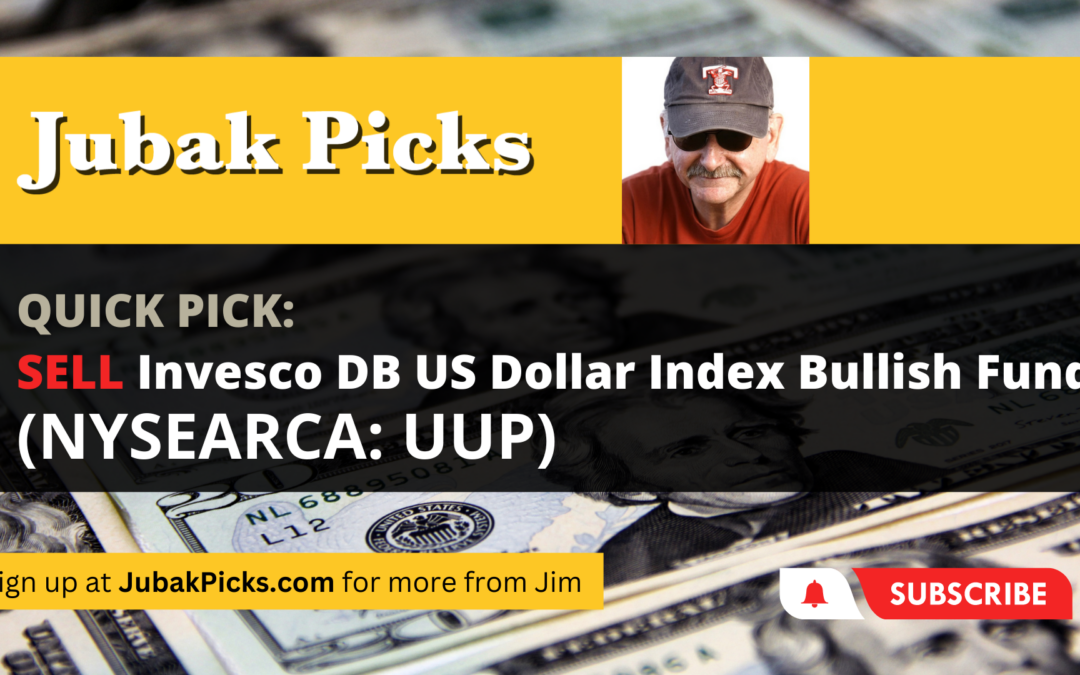 Today I posted my two-hundred-and-twenty-sixth YouTube video: Quick Pick Sell UUP. This week’s Quick Pick: Sell UUP–the dollar ETF. I had the Invesco DB US Dollar Index Bullish Fund (NYSEARCA: UUP) in my portfolio through 2022 while the dollar was doing well but the dollar has recently taken a turn South and I’m now saying: Sell. UUP was going up while expectations were that the Fed was going to continue to raise interest rates, but now that the market believes (rightly or wrongly) that the Fed will be slowing their rate hikes, we’ve seen it move down by about 1.22% for 2023. This will likely continue to be the case as other countries maintain steady interest rates or even raise them to fight inflation (Watch the European Union) and as we edge closer to the debt ceiling cliff. U.S. Secretary of the Treasury, Janet Yellen thinks the government can shift things to cover us through June, but after that, if the debt ceiling isn’t raised by Congress, the United States will not be able to borrow enough money to meet all of its obligations. I think we’ll walk right up to that cliff, but I sincerely hope we don’t go over it. For now, I’m selling UUP and I’ll be looking for a gold ETF to replace it. More on that to come! 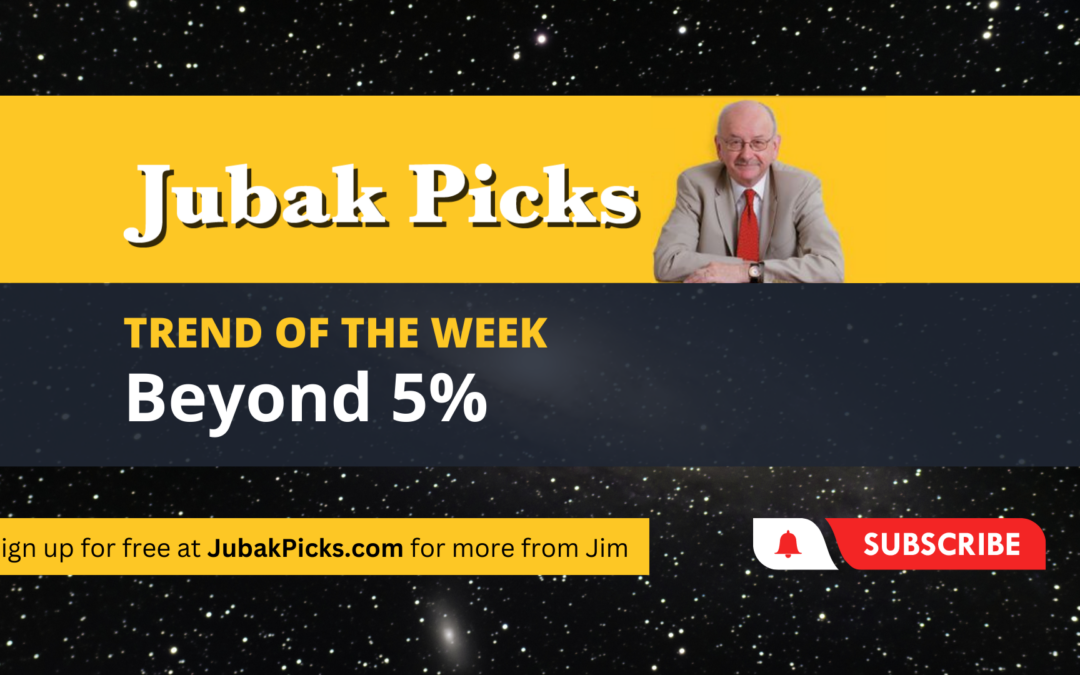 This week’s Trend of the Week: Beyond 5%. On Monday, January 9, it looked like the market was going up until Raphael Bostic (head of the Atlanta Fed) and Mary Daly, (head of the San Francisco Fed) came out saying that Fed rates may have to be raised to above 5%. Unsurprisingly, this stopped the rally in its tracks. On Tuesday, January 10, the theme of “beyond 5%” continued with Jamie Dimon, CEO of JP Morgan Chase, reiterating the idea of a 50% chance of rate increases that took the peak up to 6%. The market consensus has comfortably settled on a 5% peak, but the idea of a possible rise to 6% is starting to percolate through the market. I’m still looking for a bottom in this market in mid to late 2023. Turmoil in Congress over the debt ceiling could push that out a bit further.

Inflation, measured by the headline CPI (Consumer Price Index) fell 0.1% in December versus November. That brought the annual headline inflation rate to 6.5%. That was exactly what a consensus of economists was looking for. The core DPI, which strips out more volatile food and energy prices, rose by 0.3% in December from November. That brought the annual core inflation rate to 5.7%. Again, exactly what economists had forecast. (Remember, the inflation rate peaked at 9.1% this summer.) The stock market didn’t know quite what to do with this inflation reading, however.