I got these two key China trends wrong: Selling BABA and TCEHY

When I added Alibaba (BABA) to my Jubak’s Picks Portfolio on April 29, 2022, and Tencent Holdings (TCEHY) to my Volatility Portfolio on January 3, 2022, I thought two things were about to happen in China. First, I thought that the People’s Bank would unleash enough stimulus to more than compensate for the slowdown in China’s economy. And, second, I thought that we’d seen the end of the regulatory crackdown on China’s big entrepreneurial technology companies. I got both trends wrong.

China’s stocks took a beating today, July 11, on worries that the country is headed for a replay of the Pandemic lockdowns that battered the country’s economy earlier this year. In Shanghai, the flash point in the lockdown that ended just 5 weeks ago, the Covid case-load continued to march high. The city reported 59 new infections on Monday, the fourth day in a row with case numbers above 50. The sharp rise from single digits about a week ago follows the detection of the more contagious BA.5 sub-strain of the omicron variant. Nationally, close to 30 million people, are under some form of movement restriction. In Macao, state regulators moved to close all casinos for the first time since the early stages of the pandemic.

Commodity stocks rallied big time on Thursday, July 7, on news that China’s Ministry of Finance is considering allowing local governments to sell 1.5 trillion yuan ($220 billion) of special bonds in the second half of this year. This would be a huge expansion of the borrowing capacity of local governments–which had looked to be only around $330 million after local governments sold most of the year’s quota in the first half–and would provide a boost to infrastructure spending and China’s economic growth. The news comes as fears grow that China’s economy won’t meet the official goal of 5.5% growth in 2020.

The People’s Bank of China slashed its daily short-term liquidity operation to 3 billion yuan ($447 million) this week, the smallest amount since January 2021. At this pace, it’s likely to remove more cash in the first five days of July than it injected at the end of June. At the current rate, the People’s Bank would drain a net 428 billion yuan ($64 billion) of cash in the first five days of July, more than the 400 billion it injected at the end of June. The move looks like an effort to “normalize” China’s financial markets after a period when the People’s Bank added cash to the system in an effort to lower interest rates and increase lending in order to stimulate economic growth after Pandemic lockdowns crushed China’s economy. And to bring monetary policy at China’s central bank in line with that at other central banks that are raising interest rates. Efforts to drain liquidity from the financial system are never good for China’s stock market.

Lots of Covid news from China in the last few days. None of it was good. Shanghai reported 24 Covid infections on Tuesday, July 5. That’s the most in three weeks. Two additional cases were reported outside quarantine, raising fears that the virus is already spreading widely. That news prompted a big increase in mass testing, in 10 districts and parts of two others–out of the city’s 16 districts. Fear that this is just the first step in a return to the Pandemic lockdown that crippled Shanghai’s and China’s economies took the CSI 300 Index as much as 2.1% lower during the day. That’s the biggest drop since late May. 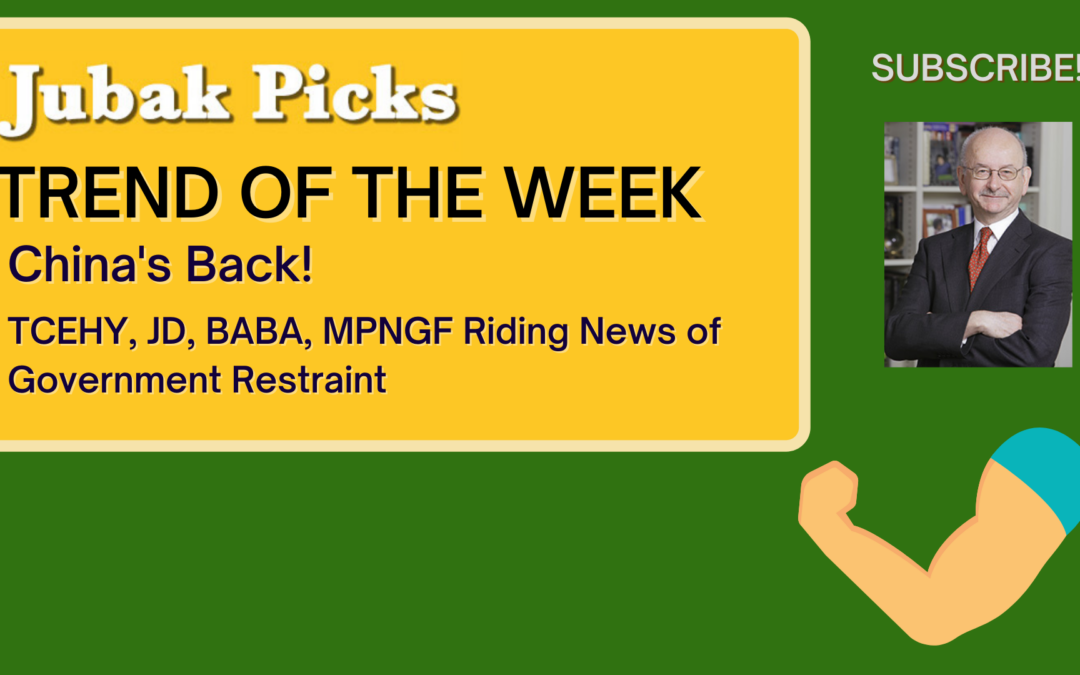 Please watch my new YouTube video: Trend of the Week China’s back!

My one-hundredth-and-ninth-eighth YouTube video “Trend of the Week China’s back!” went up today. At the end of last week, the Chinese government sent signals that it would make moves to stimulate the slowing economy amid widespread lockdowns, as well as letting up slightly in its crackdown on internet companies. This has sent Chinese tech stocks soaring, with multiple percentage-point increases in a few hours. In this video, I look at Tencent (TCEHY), JD.com (JD), Alibaba (BABA) and Meituan (MPNGF) and talk about why this is an important trend to follow, but why we’ll only see these stocks go up in the short term before government pressure sends them back down.

The Chinese government has promised more stimulus to prop up growth in the country’s economy and the Politburo has indicated that, at least temporarily, it will slow the pace of its regulatory crack down on China’s Internet companies. The combination, as I posted in today’s Quick Pick YouTube video, has launched a huge rally in China’s Internet and e-commerce stocks. As of 3 p.m. on Friday, April 29, the New York traded shares of Tencent Holdings (TCEHY) wee up 8.95%. JD.com (JD) hadgained 7.72%. And Ablibaba (BABA), the big name among foreign investors and the leading target of government regulators is up 8.26%. On this trend, I’m adding shares of Alibaba to my JubakPicks Portfolio today

China expanded coronavirus testing to most of Beijing as rising cases fuel fears about an unprecedented lockdown of the capital. Officials on Monday night said testing would take place in another 11 of Beijing’s 16 districts, moving beyond just Chaoyang, where most of the infections have been detected since Friday. The city of more than 20 million people has already locked down parts of the eastern district of Chaoyang, home to 3.5 million people, with plans to ease restrictions after residents complete a testing regimen on April 27. The bad news from Beijing added to new bad news from a locked down Shanghai

Is this stock market too directionless to be tradable in the short-term?

I’m not putting on any leverage bets on market direction at the moment. The trend is just too “trundles.”

Yesterday, March 15, I was thinking that I wished I didn’t own any China stocks at all. Today, March 16, I wished I owned more. Lot’s more.

In the coming week I expect global stock market action to shift to China. With every other stock market looking almost too risky to invest in, and the recent advice to invest in emerging market stocks, China’s short-term story looks (relatively) very attractiveAt the opening of China’s weekend session of the country’s legislature on Saturday, China’s premier, Li Keqiang, announced that the 2020 growth target for the country’s economy was “around 5.5 percent.”