Apple (AAPL) shares fell 2.63% today on estimates that Covid-lockdown turmoil at Chinese iPhone supplier Foxconn Technology could result in a production shortfall of 6 million units of the company’s iPhone Pro. And there’s a chance that production shortfalls could grow if Foxconn can’t get workers back to its assembly lines. The Put option on Apple that I bought back on October 12, 2022, jumped 59.79% today to $136 for a contract on 100 shares. But this option with its strike price of $135 expires on December 16. Which means that I’m running into that good old-time decay problem. If the stock, which closed at $144.22 today, doesn’t fall below $135 by December 16, then this option will expire worthless. 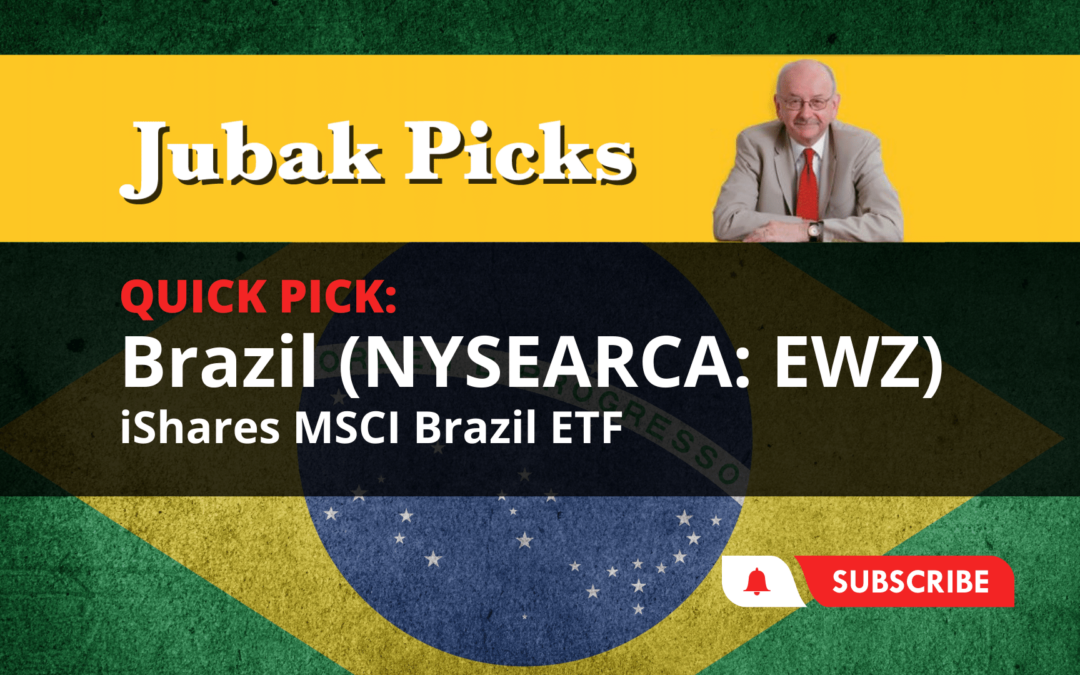 Today I posted my two-hundred-and-first YouTube video: Quick Pick Brazil ETF EWZ. This week’s Quick Pick is Brazil, iShares MSCI Brazil ETF (NYSEARCA: EWZ). While the election in Brazil isn’t totally over with an actual concession speech, it’s clear Luiz Inacio Lula da Silva has defeated President Jair Bolsonaro, making Bolsonaro the first Brazilian President ever to not win a second term. Bolsonaro has yet to concede to Lula and his followers are still engaged in massive protests against the outcome. Even if Bolsonaro never concedes, a good measurement of how the post-election violence is trend is the number of roadblocks by Bolsonaro supporters throughout the country. The current count is 192 roadblocks cleared, 271 still up – but the Supreme Court has imposed fines to put pressure on the police to remove the roadblocks. As the roadblocks go down and Bolsonaro supporters gradually retreat from violence, Brazilian stocks will go up as Lula steps into the presidency. The iShares MSCI Brazil ETF currently is paying a hefty dividend of 11% 12% and you get a lot of exposure to Petrobras and Brazilian consumer stocks. I especially like that consumer exposure since I think Lula will invest in the consumer sector.

On Tuesday U.S. natural gas prices tumbled after the operators of the Freeport liquefied natural gas terminal said production will resume in early to mid-November instead of October as earlier announced. The terminal, which handles almost 20% of U.S. LNG exports, was knocked out of operation by an explosion in June. The trouble at Freeport has been an especially big deal for European LNG shipments since the United States sends almost 75% of its LNG to Europe and that market has been scrambling to replace natural gas from Russia after that country’s invasion of Ukraine. Natural gas futures dropped 6.5% on Tuesday after hitting $10 per million BTUs for the first time since 2008. Today, Wednesday, August 24, natural gas futures for September delivery are up 2.09% as of 1:30 p.m. New York time.

Acres that U.S. farmers were unable to plant have more than tripled from the same period last year as extreme weather wreaks havoc on fields, according to the August report from the Farm Service of the U.S. Department of Agriculture. Prevented planting acres–or the acres of insured crops that can’t be planted because of disasters including flooding and drought–stood at 6.4 million. That’s up from 2.1 million in 2021. Prevented planting acres of corn jumped to more than 3 million acres, from 639,000 acres in 2021, according to the USDA. Wheat shot up to more than 1 million acres from nearly 300,000 acres last year. Not surprisingly grain prices have climbed–and so have the prices of commodity funds. The Teucrium Corn Fund ETF (CORN) is up 4.01% today, August 23, as of noon New York time. The ETF is a member of my Volatility Portfolio where it’s down 8.45% since I added it on June 17, 2022. The Teucrium Wheat Fund ETF (WEAT) is up 2.58% as of noon today. That ETF is a member of my Jubak Picks Portfolio. It’s down 27.26% since I added the position on May 25, 2022.

I got these two key China trends wrong: Selling BABA and TCEHY

When I added Alibaba (BABA) to my Jubak’s Picks Portfolio on April 29, 2022, and Tencent Holdings (TCEHY) to my Volatility Portfolio on January 3, 2022, I thought two things were about to happen in China. First, I thought that the People’s Bank would unleash enough stimulus to more than compensate for the slowdown in China’s economy. And, second, I thought that we’d seen the end of the regulatory crackdown on China’s big entrepreneurial technology companies. I got both trends wrong.

It’s hard making a profit on volatility trades in a market that’s as volatile as this one.

You’ve got to get the direction right, the timing, and the price. Miss one and get the other two and you can still wind up in the red. Which is where I find myself on the Nvidia Put Options (NVDA220819P00165000) I bought in my Volatility Portfolio on July 22 with a strike of $165 and an expiration date of August 19.

Buy on the rumor, sell on the news: I’m selling ChargePoint out of my Volatility Portfolio tomorrow, August 9

As I referenced in my post “What to sell and when in this Bear Market Rally,” I’m applying the old Wall Street advice of buy on the rumor and sell on the news to electric vehicle charging stocks. Specifically to ChargePoint Holdings (CHPT)Like just about any stock associated with controlling global climate change, ChargePoint soared ahead on the surprise deal that revived “green spending” in the Inflation Reduction Act of 2022. There’s money in that bill for promoting electric vehicles and for solar and wind power. (And let’s not forget big bucks for hydrogen power, too.) That bill has now passed the Senate (amazingly) and looks almost certain to pass the House of Representatives, where Speak Nancy Pelosi can, I think, be counted on to hold her slim majority together. Which means all that potential spending good news for stocks in this sector is now out there.

Finally, on Friday, August 5, in documents filed with the Securities & Exchange Commission Tesla put dates to the split its 3/1 split 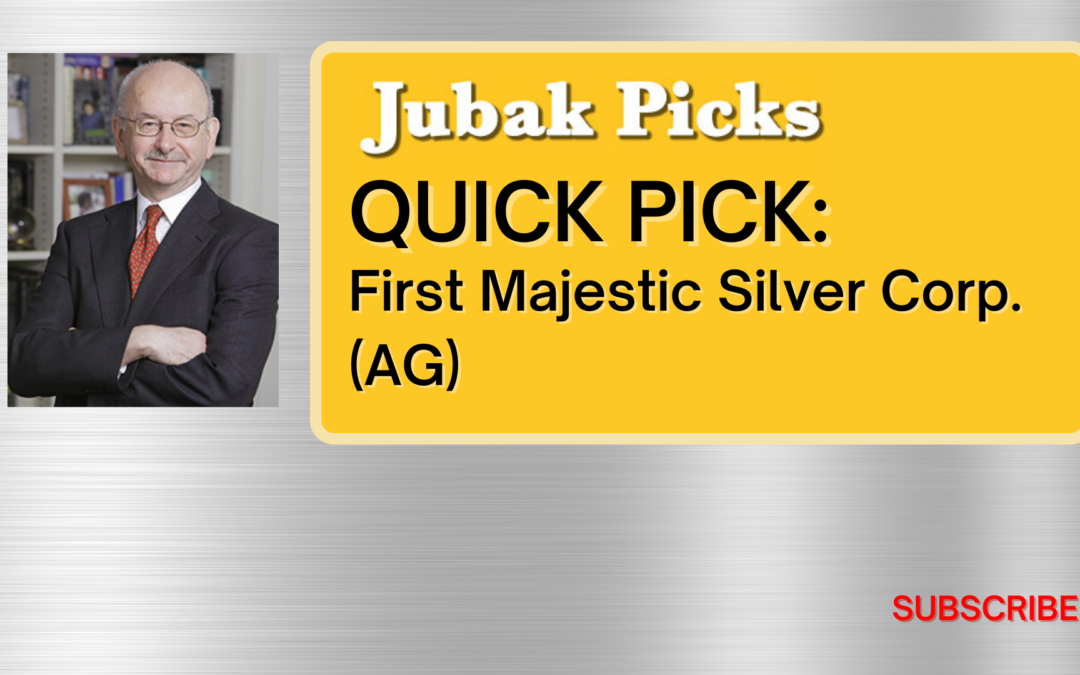 My one-hundred-and-sixty-first YouTube video “Quick Pick First Majestic Silver” went up today. This hasn’t been a great year for precious metals hedges. However, allow me to make the case for First Majestic Silver (AG), given the coming recession and my expectations for the Fed’s schedule of rate increases. A hedge for 2023? At the current price, it’s an attractive bit of insurance against a big surge in risk.

At the close today, July 26, the Teucrium Corn Fund (CORN) was up 2.55% and the Teucrium Wheat Fund (WEAT) was ahead 4.11%. Both of those commodity plays outgained the U.S. Natural Gas Fund (UNG) with its 1.38% move higher. But for consistent gains–and the potential for more–I’d have to say that natural gas is my favorite commodity.

We’ve had a great one-week rally/bounce/whatever in chip stocks. Nvidia, for example, was up 17.42% for the week that ended on Thursday, July 21. Advanced Micro Devices (AMD) was up 8.71% in that same period. But I think there are good reasons for thinking that this move was just a very short-term gain in a long-term Bear Market that remains in place. So today, I’m taking some chip money off the table.