Gold draws near even for the year, approaches resistance

Gold closed up today, May 24, by 0.27% to $1884.00 an ounce for August delivery on the COMEX. That took the metal to its highest price since its January 5 high for 2021 at $1954. The rally in gold from a March 8 low at $1678 an ounce, has not only brought gold near breakeven for 2021, but is pressing against resistance near $1900 an ounce. Gold has posted three straight weekly gains. No secret what’s been driving gold higher: fears of rising inflation.

Before you get too excited by that headline, note that a 30% hike in the dividend at Wheaton Precious Metals (WPM) will bring the payout to just 13 cents for the first quarter of 2021. But that’s still, as my grandmother used to say, better than a poke in the eye with a sharp stick. At the least it’s a vote of confidence by the company’s board of directors that they see strong revenue and earnings growth in the year ahead. Wheaton Precious Metals doesn’t actually do any mining itself. Instead it purchases a stream of production from miners of precious metals and cobalt. 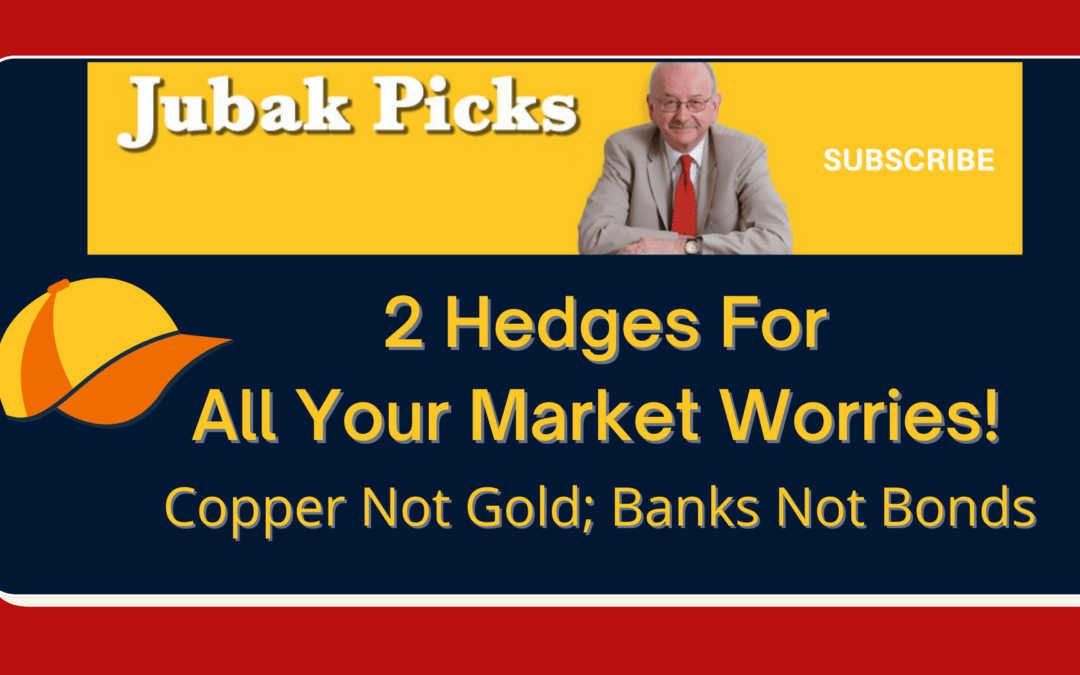 Watch my new YouTube video: 2 Hedges for All Your Market Worries

I’m starting up my videos on JubakAM.com again–this time using YouTube as a platform. The thirteenth YouTube video “2 Hedges for All Your Market Worries” went up today.

As of the close in New York today, February 22, the yield on the 10-year Treasury had climbed another 3 basis points to 1.37%. Commodities that can act as inflation hedges were up as well. Copper showed no signs of ending its climb, rising 4.17% today to $8909 a ton on the London Metal Exchange today

At the close today the Standard & Poor’s 500 was down 0.19%. The Dow Jones Industrial Average ended dead even. The NASDAQ Composite “soared” 0.07%. It wasn’t until you looked at the Russell 2000 small cap index that you saw any signs of what a wild day it was. That index, so economically sensitive these days, finished ahead 2.04%. Don’t look to the usual suspects if you’re seeking big winners today.

In today’s YouTube Video “Avoiding Di-Worsification in 2021 in argued that the trend toward high yields on long-dated Treasuries–and thus lower prices for those bonds–should prompt investors to look beyond bonds and gold in their efforts to build diversified portfolios. I’m adding a copper miners ETF to my Millennial Portfolio tomorrow as a replacement for gold and to profit from the increased copper demand resulting from larger numbers of electric cars on the road over the next decade 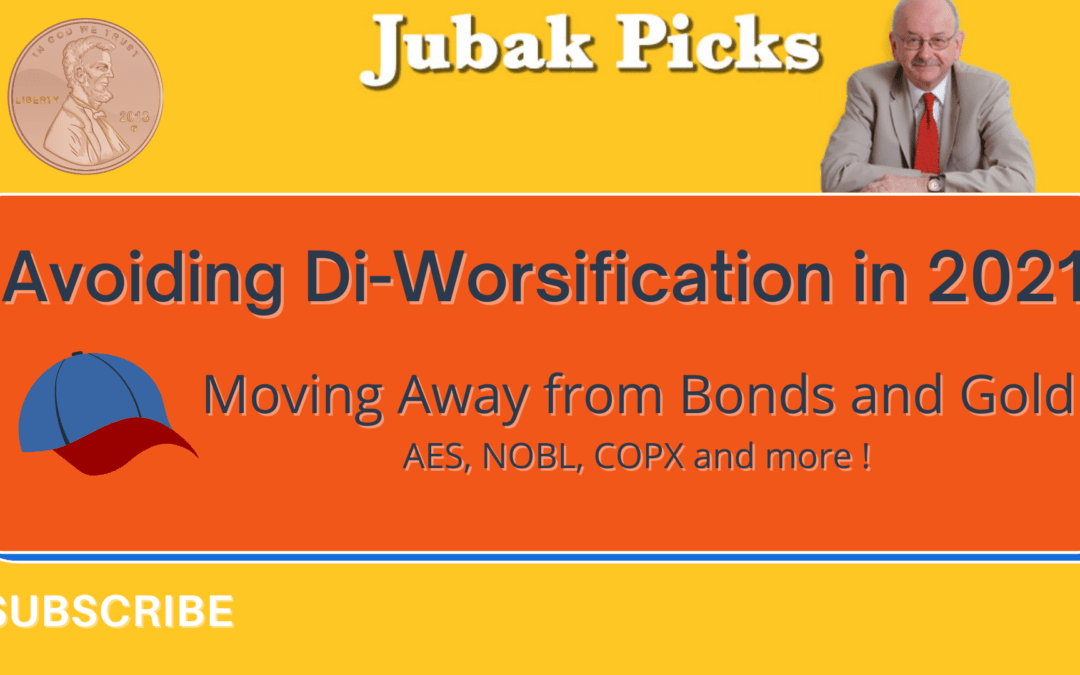 I’m starting up my videos on JubakAM.com again–this time using YouTube as a platform. The tenth YouTube video “Avoiding Di-Worisification in 2021” went up today.

U.S. GDP growth slowed in the fourth quarter, gaining just 1% from the third quarter. For the full year the U.S. economy contracted by 3.5%. That makes 2020 the first time that the economy has contracted for a full year since 2009 and the Great Recession. At the bottom of that recession that economy contracted by 2.5%. 2020 is also the worst year for economic growth since 1946 when the economy shrank by 11.6% as the country demobilized after World War II. Consumer spending slowed in all 15 categories tracked by the Bureau of Economic Analysis. The sectors that had powered the recovery in the third quarter–restaurants and hotels, for instance–reversed. The growth in spending on cars and health car also slowed from the acceleration in the third quarter. So why is this good news as far as the stock market is concerned?

Gold is behaving like Biden stimulus is on its way

Gold futures on the COMEX for February delivery closed up 1.4% today, January 20, at $1866.50 an ounce. That’s the highest finished for the most active contract on the futures market since January 7. Silver for March delivery closed up 1.8% to $25.766 an ounce. All the talk about the need for a big stimulus program, bigger even than in response to the global financial crisis and the Great Recession, has sent some traders looking for inflation plays.

Yes, the big indexes were down today, January 4, with the Standard & Poor’s 500 off 1.48% at the close; the Dow Jones Industrial Average down 1.25%; and the NASDAQ Composite lower by 1.47%. But I think we can find some clues about tomorrow’s action–and the moves over the next month or more–from taking a look at individual stocks and sectors.

In my daily trawling through the market I come upon lots of tidbits of knowledge that I think are important to investors but that don’t justify a full post. I’ve decided to start compiling these notes here each day in a kind of running mini blog that I’m calling Notes You Need. I launched this new feature on JubakAM.com on December 1, 2016. It runs only on JAM and won’t appear anywhere else. (Because I haven’t done one of these in a while and because there’s so much news, this might run on for a while.) For example, today at 10:20 a.m. I posted: More than 2.4 million people moved through TSA airport checkpoints this past weekend. That’s about 50% down from the number of people who went through airports in the two days after Christmas in 2019. But it’s the busiest weekend since March. More than 1.28 million people traveled Sunday, the biggest number since 1.52M people flew on March 15. Air travel hit a low of 90, 500 people flying on April 12. The CDC has advised, and state health officials have pleaded, for people to stay home for the holidays in an effort to damp the surge in coronavirus infections.

Closing all of my Options hedges in the Volatility Portfolio; holding off until January or February to add new downside protection

Stock have moved up so strongly that the Put Options I own in my Volatility Portfolio are no longer providing any significant downside protection against a market downturn. Especially since two of the three–the Puts on MGM Resorts International, and Vale l expire on December 18. The last Put, the one on American Airlines, expires on January 15, 2021, but I’m closing that position as well.  I’m also selling my two Call Options on Barrick Gold, and the VanEck Vectors Gold Miners ETF since they also expire on December 18 and they are also so far out of the money the holding is pointless. Those Calls on gold were also added as protection against an outbreak in market volatility that never arrived.