Well, Taiwan Semiconductor Manufacturing (RSMC) ought to know. The world’s largest chip foundry makes semiconductors for just about everyone. And last week the company said that it expects revenue to fall in the first half of 2023 as semiconductor companies cut orders and reduce inventory. But, the company says, it expects demand to return to “normal” in the second half o 2023.

Microsoft reportedly plans to cut 11,000 jobs; this is a serious indicator for the economy

Granted these are all reports from outside news sources but there are a number of them. Where there’s smoke there might well be fire. U.K. broadcaster Sky News has reported that Microsoft plans to cut about 5% of its workforce or about 11,000 roles.

Today I’m selling ASML Holding (ASML) out of my long-term 50 Stocks Portfolio. My take on Asmel hasn’t changed: this is one of the key chip equipment companies in the drive to produce smaller and denser chips. What has changed in the market and the global economy. I think that technology, and especially chip stocks, are in a downtrend that has a lot longer to run. And that recent U.S. restrictions on advanced chip technology exports to China will set off a trade war that will come down heavily on companies such as ASML.

Apple tells suppliers to cut iPhone plans by as many as 6 million units in second half of 2022.

The Standard & Poor’s 500 was on track for a decent day–the index was up 0.79% at 12:43 p.m. New York time–and then Bloomberg broke a story, picked up everywhere, reporting that Apple (AAPL) intended to slow hiring and reduce spending growth next year. The S&P 500 finished the day down 0.84% and Apple shares closed down 2.06%.

Two up days for chip stocks–did they just get too cheap?

Here’s what caught my eye yesterday, April 18. For a big change from recent losses, the chip group of stocks was all in the green. And not just by a pinch either. Yesterday Nvidia (NVDA) was up 2.47%: NXP Semiconductors (NXPI) was up 1.91%; Synaptics (SYNA) was up 4.49%; and Qualcomm (QCOM) was up 1.76%. Is something going on in the sector? 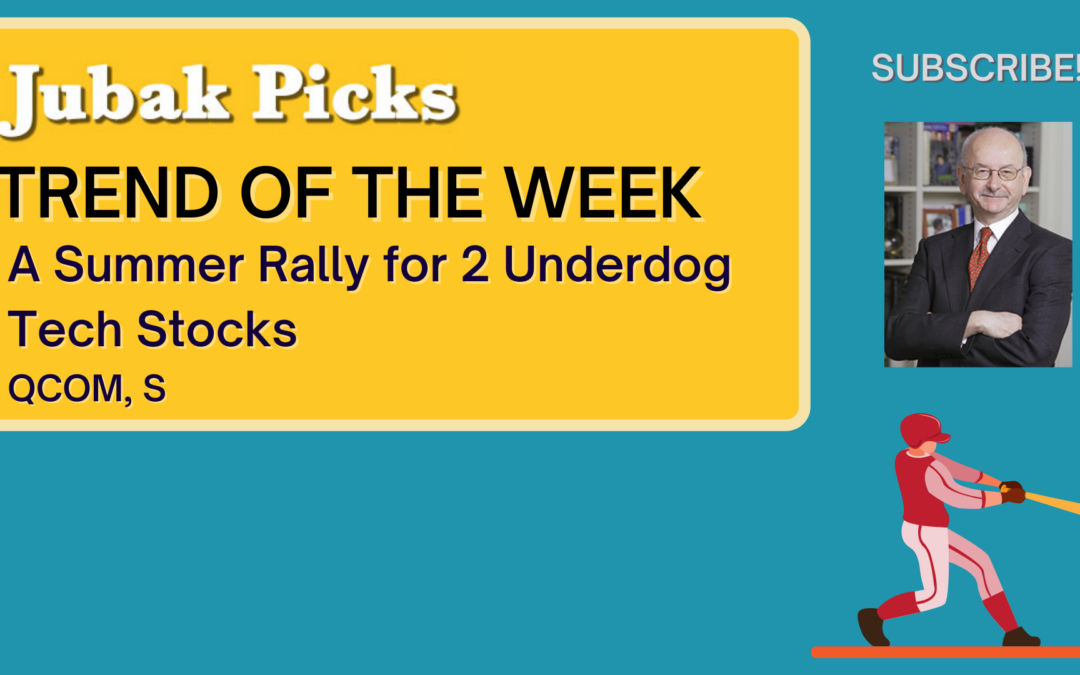 My one-hundredth-and-twenty-second YouTube video “Trend of the Week: A Summer Rally for Two Underdog Tech Stocks” went up today. This week’s video looks at the implications of the coming “summer rally” for 2 tech stocks that have been pounded this year: Qualcomm (QCOM) and SentinelOne (S).

A Special Report preview: From buy on the dip to sell on the bounce–this is a stock market in transition

Today, March 17, the stocks, and especially the technology stocks, that have been pummeled in 2022 continued their three-day bounce. For another day, at least, buy on the dip proved to be a very profitable adventure. Lithium recycling startup LiCycle (LICY), for example, gained 10.18% after climbed 6.74% on Wednesday, March 16. Electronic payments platform Block (SQ), formerly known as Prince (no, I mean formerly known as Square) rose 10.26% after picking up 12.57% on Wednesday, March 16. Cybersecurity newcomer SentinelOne (S) climbed 7.48% after a gain of 13.47% on March 16. Stocks like these (and many more) were just too cheap traders decided. But there were signs of, possibly (and we’ve been down this road before so let’s just say “possibly”), of a new caution. A sell on the bounce caution.

It’s official: NASDAQ Composite is in a correction (thanks to the continued rout in tech stocks)

The Nasdaq Composite Index closed down 1.15% on Wednesday, January 19. That marked the first close for the index in correction territory since March. (The common definition of a correction is a drop of 10% or more.) The technology-heavy index is down 8.3% so far in 2022 closing t 14,340.25 on Wednesday. That’s 10.69% below the November 19 record high.

After the Fed speaks, the same technology stocks soar

The saying is that stocks don’t have memories. They don’t know where they once traded and they don’t have any desire to rise or fall to where they once traded. On the other hand, investors do–have memories that is. They do think that stocks will trade back to former levels–when opportunity offers–and it takes a lot of break that conviction. Which is why trading patterns, the ones captured in technical analysis, persist for such long period. And if you needed evidence, just look at how stocks traded after the Federal Reserve’s interest rate pivot yesterday.

I’m look for a test of the Friday’s rotation into technology stocks and away from anything that depends on economies remaining relatively free of Pandemic restrictions. On Friday, the winners were technology shares–Apple, Amazon, Tesla, Nvidia, for example–that have in the past been able to show revenue and earnings growth despite any economic slowdown resulting from Covid shutdowns. And the losers were the stocks of companies–such as Six Flags, United Airlines, Macy’s, for example, that depend on the continued recovery in economic activity. The immediate impetus for this sentiment came from news that Austria would impose Pandemic economic lockdowns–again–in an effort to slow soaring rates of infection. The believe is that Germany, the Netherlands, France, and the United Kingdom aren’t far behind. And the fear is that the United States will follow some time this winter. Add that to worries of elevated and rising inflation–where technology companies are seen as one of the few sectors able to outgrow inflation–and you’ve got significant sentiment to push technology shares higher. Logically.

Forward into the past with tech stocks: We’ve seen this market before

On November 15 in my post on what’s priced in and what’s not, I noted that an upsurge in Covid infections this winter wasn’t priced in. And that evidence of a new wave from Europe where infection rates have headed higher in what might be a preview for the winter in the United States could send stock prices lower. Well, yes indeedy. That exactly what happened today after the Austrian government announced a full lockdown starting on Monday, in response to surging cases of COVID-19. The lockdown will include both those vaccinated and unvaccinated, it will last for 10 days minimum, but could be extended for 10 days further. The fear is that Germany, which is battling its own higher rates of infection, is next.