Today, Wednesday, October 5, OPEC and its allies, including Russia, approved a two million barrel-a-day cut in oil production. This is the largest cut in production since the onset of the pandemic. Here’s the key paragraph in the OPEC+ statement: “Adjust downward the overall production by 2 mb/d, from the August 2022 required production levels, starting November 2022 for OPEC and Non-OPEC Participating Countries as per the attached table.” On the news, oil and oil stocks extended the rally that began on news leaks yesterday.

All it takes is a report that OPEC+, the group of oil-producing countries that includes Saudi Arabia and Russia, is considering a big cut in production at its meeting this week to send oil and oil stocks off to the races. As of noon New York time on Monday, U.S. benchmark West Texas Intermediate is up 4.21%, and international benchmark Brent crude is higher by 3.75%.

Today, October 1, I’ve gone back through this Special Report to update any parts of my calendar in light of what we’ve learned about the economy, about Federal Reserve interest rate policy, and about the global economy in the last few weeks. This update includes my take on the August jobs report and the September 21 meeting of the Fed. (It’s a complete revision of the original so changes are in the body of the original text.) It is different this time. And it’s likely to “be different this time” for the next five years or so. And you need an investment strategy for that period.

Today, September 5, I’ve gone back through this Special Report to update any parts of my calendar in light of what we’ve learned about the economy, about Federal Reserve interest rate policy, and about the global economy in the last few weeks. This update includes my take on the August jobs report and on recent Fed-speak from the Jackson Hole conference and after. It is different this time. And it’s likely to “be different this time” for the next five years or so. And you need an investment strategy for that period.

What to do about your oil stocks?

I’ve seen several comments on the site asking this question. I assume we’re talking about oil stocks in the short- and medium-term. In the long term, I think it’s clear that you should be thinking about selling these out of your portfolio at a profit (of course) whenever you can. Demand for oil will fall in the long-term–defining long-term as 5 years or more–or we can all count on figuring out how to survive 120-degree (Fahrenheit) heat. Today, August 5, is a good synopsis of what’s going on with oil and oil stocks in the short- and medium-term.

At the close today, July 26, the Teucrium Corn Fund (CORN) was up 2.55% and the Teucrium Wheat Fund (WEAT) was ahead 4.11%. Both of those commodity plays outgained the U.S. Natural Gas Fund (UNG) with its 1.38% move higher. But for consistent gains–and the potential for more–I’d have to say that natural gas is my favorite commodity.

What’s an oil company without oil? Essential context for my next pick in my Special Report “Own the Future for Pennies” (and pretty important for oil stock shareholders too)

I sure hope President Joe Biden got a T-shirt from this recent trip to Saudi Arabia. You know the kind. One that says, “I went to Saudi Arabia and all I got was this lousy t-shirt.” Because he sure didn’t get a deal for increased oil production from the Saudis. 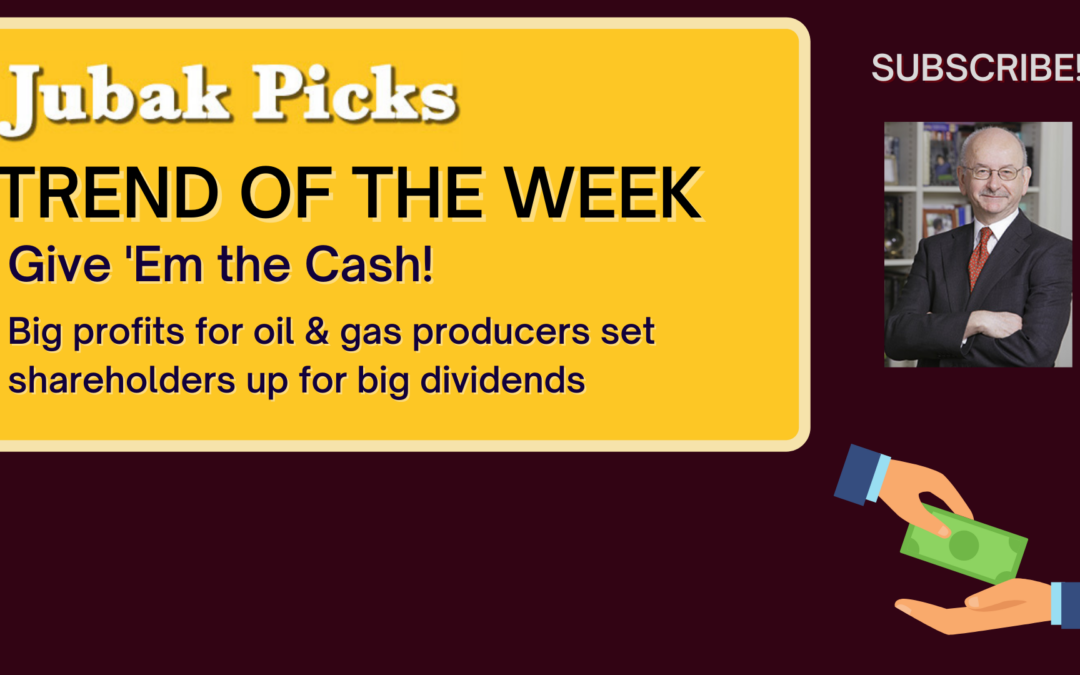 Please watch my new YouTube video: Trend of the week Give ‘Em the Cash

My one-hundredth-and-thirty-second YouTube video “Trend of the Week Give “Em the Cash” went up today. So far, so good this earnings season: oil and natural gas producers are holding the line on capital spending on new production, as they promised, and returning the huge increases in profits from the jump in oil and natural gas prices resulting from the Russian invasion of Ukraine and the sanctions slapped on Russian energy exports. And they’re returning those profits, as promised to shareholders as dividends. Big dividend payouts. Look at Pioneer Natural Resources (PXD), for example, which beat earnings for the first quarter and raised its dividend payout to what amounts to better than 11% annualized. I think we’ll see this trend continue for a while, especially as many CEOs stick to the path of putting fewer resources into new exploration and production because they can’t be sure how long the current level of prices will last.

Another round of higher oil prices headed our way

Today, April 21, reports from a number of different sources are pointing to lower oil production–which will mean higher oil prices. Even from current levels. And oil prices are significantly higher in the past three weeks. At 3:00 p.m. New York time today U.S. benchmark West Texas Intermediate traded at $103.44 a barrel, up 1.61% on the day. On April 11 West Texas Intermediate traded for just $94.29 a barrel.

Yesterday’s optimism about a cease fire in Ukraine and peace talks turns back into pessimism (realism?) today

Hopes for a cease fire in Ukraine and for serious peace talks between Russia and Ukraine took the stock indexes up yesterday and the price of oil and oil stocks down. News of renewed Russian shelling today took the market back down and oil and oil stocks back up today. 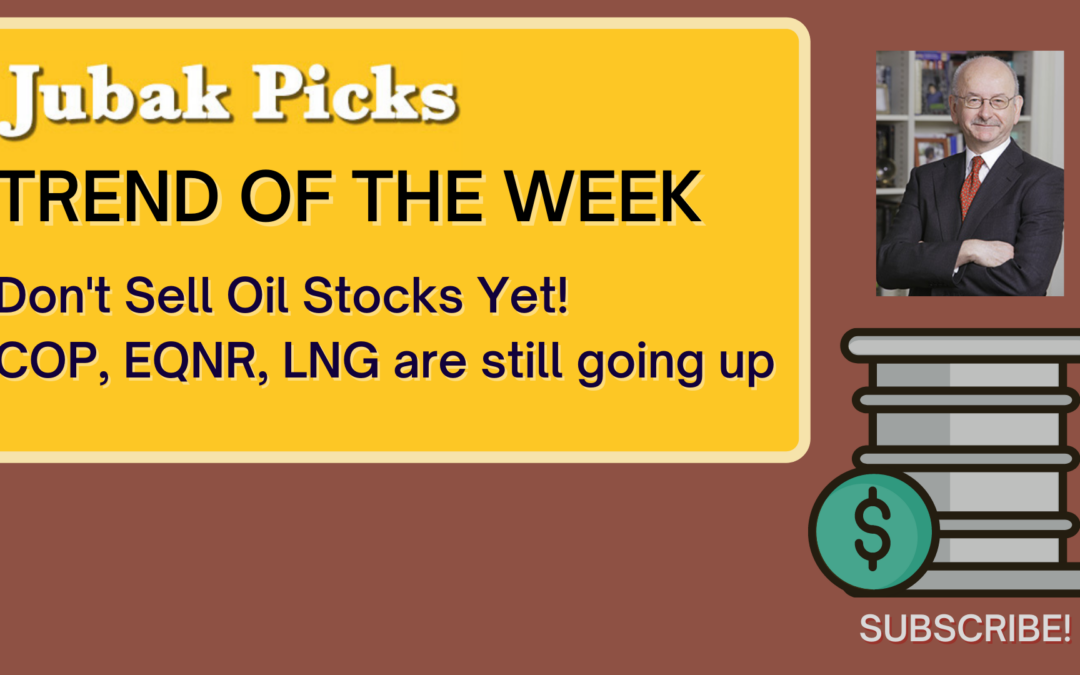 Please Watch my YouTube video: Trend of the Week: Don’t sell those oil stocks yet

Don’t sell those oil stocks yet! Back at the beginning of the year, I anticipated that coming conflict between Russia and the Ukraine would drive up the price of oil, and the stocks I added to my portfoliohene stocks (COP, EQNR, LNG) have all been up big. But, I don’t think it’s time to sell yet. Why? Summer. Summer is the big driving season in the Northern Hemisphere, and right now (in what’s called the “shoulder season”) reserves of gasoline are supposed to be replenished in anticipation of summer. But that’s not happening due to Russia-Ukraine, and I think with summer we will see prices for oil spike even higher. That’s why I wouldn’t sell these stocks yet. (And that’s despite of the selling today, March 28, on more lockdowns in China)