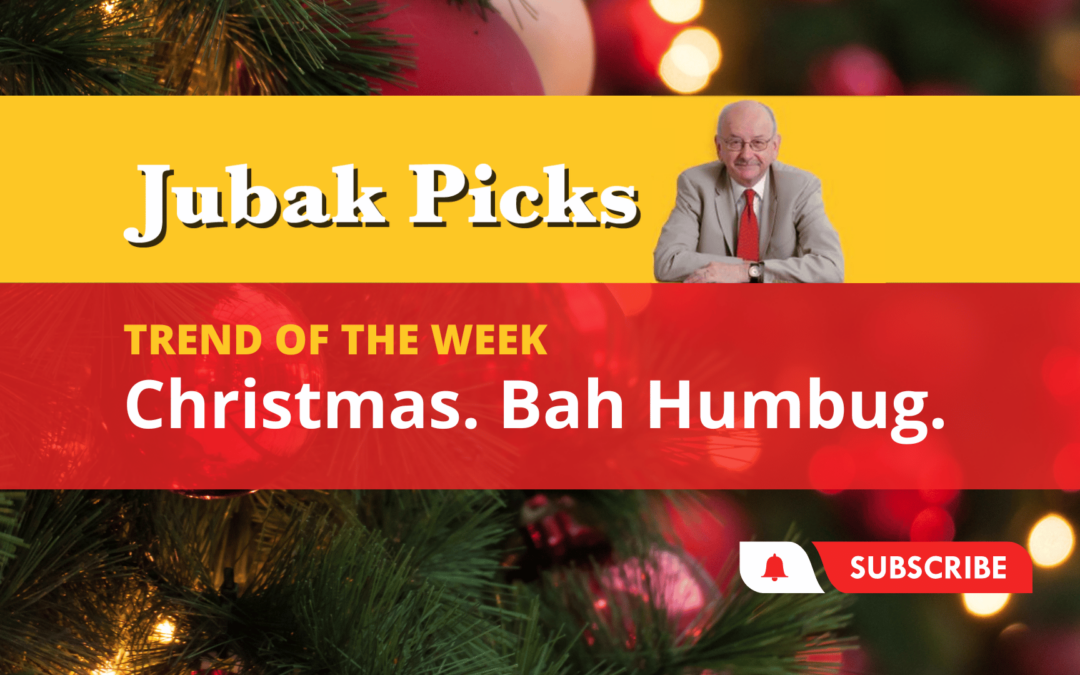 This week’s Trend of the Week: Christmas? Bah Humbug! Harris recently did a poll for Bloomberg that showed 60% of the people polled said they would be buying fewer gifts for fewer people this year due to inflation. That same poll said that 60% of respondents said they’d be cutting back on holiday travel, and 33% said they were skipping gift-giving completely. We’ll skip the discussion about the spirit of Christmas, and look at how this is going to affect retail and airline earnings in January. Retailers like Costco, Wal-Mart, and Kohl’s have already warned Wall Street that sales will not be great for Christmas, but even with that warning, retailers could surprise investors with lower-than-expected numbers. Costco announced its fiscal first-quarter earnings on December 10 with sales going up 6%. Although they were warned that margins were going to be soft, Wall Street was expecting 6.9% same-store growth and punished the shares accordingly with a huge drop in the stock. Costco is a great retailer for this moment, with affordable pricing on a wide range of goods and gas sales bringing in traffic. If Costco’s trending this way, I think we can expect the same from companies like Walmart and Kohl’s. It’s likely the airlines will take a hit as well, with the drop in holiday travel. For now, drink your wassail and try not to think about impending January earnings!

Yesterday, shares of clean energy battery startup Freyr Battery (FREY) rumbled 12.01% on news that the company would sell 20 million new shares to raise capital for its planned battery factories in Norway and (newly announced) Georgia. Today, December 2, traders and investors have done a bit of rethinking and bid the stock up 3.91% as of the close.

GM forecast electric vehicles to generate a profit in 2025

Granted it’s only a forecast, but yesterday General Motors (GM) forecast that its electric vehicle models will start generating a profit in 2025. The company now projects free cash flow of as much as $11 billion, compared with prior guidance of $7 billion to $9 billion. Electric-vehicle sales should top $50 billion in 2025, GM said. The Detroit-based company plans to build 400,000 EVs in North America from 2022 through the first half of 2024. Production capacity will reach 1 million units annually in North America in 2025. By 2025, its family of electric crossover SUVs, pickups, and luxury models will compete in segments that represent about 70% of the electric vehicle industry volume, the company projects.

When I put together my Special Report: “5 Safe Dividend Stocks Paying 6% or More,” one key requirement was that the company showed a long track record of raising dividends every year and the clear potential to continue to raise dividends every year. That formula could turn a 6% annual dividend yield now into 8% or 9% or even more over the next ten years. A safe almost guaranteed 10% yield at the end of 10 years strikes me as a very attractive prospect, especially given how tough I think the financial markets are going to be over the next five years or more. (For more on that outlook see my recently revised Special Report: “Your Best Investment Strategy for the Next Five Years.”) But I realized, looking at all the high-yield stocks that didn’t make the cut for that report that the requirement for a high-probability trend of higher dividends each year for the next 10 years, that this requirement left a lot of stocks paying very attractive high dividends now on the cutting room floor. Stocks paying 8% or more got left off the list because I didn’t see a commitment at the company to continued dividend increases every year or enough growth in free cash flow to make it possible for a company to raise or maintain its dividend through the ups and downs of the business cycle. These stocks paying 8% or more were very safe bets to continue paying that yield for the next year or two. But 10 years? Too much uncertainty. Which doesn’t mean you shouldn’t own some of these stocks now. An 8% or better yield for a couple of years is a very attractive prospect given how uncertain the economy and the stock market are right now. And an investor has a very simple remedy if a company looks like it can’t or isn’t committed to sustaining that yield. Sell the stock. So with all that in mind, I’ve put together a list of five “outlier” dividend stocks paying 8% or more at a time when the SPDR S&P 500 Trust ETF (SPY) has a yield of just 1.6%. 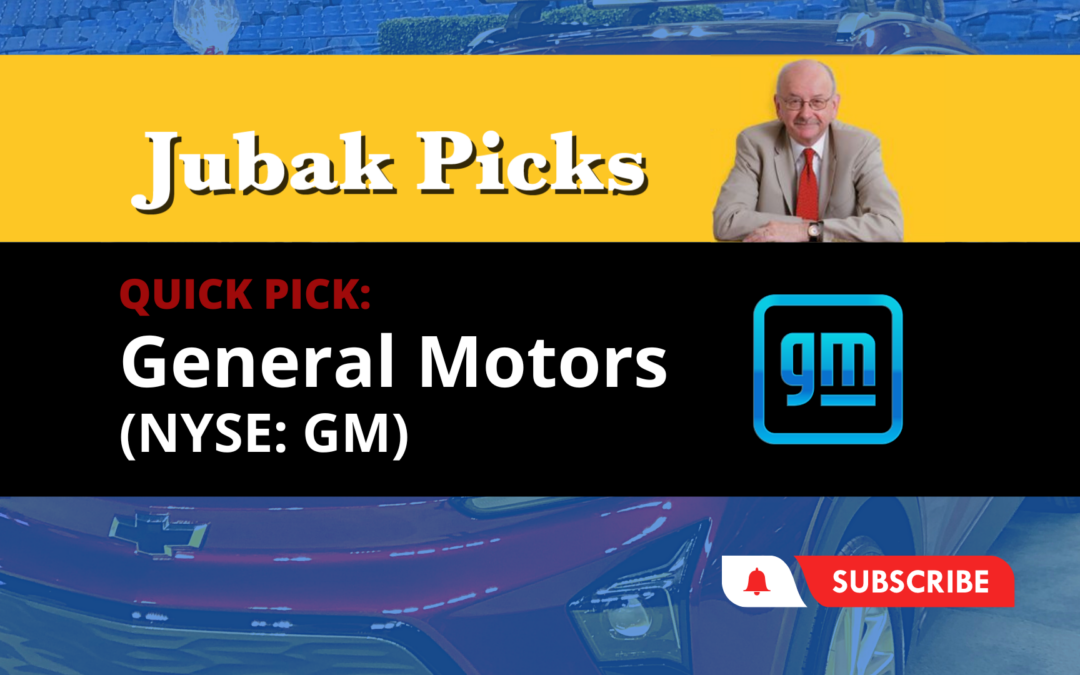 Today I posted my one-hundred-ninety-ninth YouTube video: Quick Pick General Motors. This week’s Quick Pick is General Motors (NYSE: GM). On Monday morning, October 25, GM announced third-quarter revenue earnings of $41.89 billion-slightly below the $42 billion that Wall Street was expecting, but still a record high for General Motors. The adjusted earnings of $2.25 per share killed Wall Street estimates of $1.89. Additionally, GM confirmed its full-year earnings guidance of $13 to $15 billion for the year. That’s extremely reassuring for a market wary of a possible recession. The Chevy Bolt is back (after a previous halt to sales due to severe battery problems) and took about 8% of the US market for electric vehicles in the last quarter. The successful return of the Bolt, with more electric vehicles coming in 2023, gives GM, essentially, sole (or close to it) ownership of the low-priced end electric vehicle market. The company also recently announced that it has assured supply of the materials needed to build the vehicles and batteries through 2025 at a rate of one million vehicles a year. While GM is no Tesla, the stock isn’t priced as if it were, either. Is Tesla with a market cap of $689 billion actually worth 12 times GM’s $53 billion? I’ll be adding recently added GM to my portfolios on JubakPicks.com and JubakAm.com.

Coca-Cola: Can you say pricing power?

On Monday on my subscription JubakAM.com site, I made Lynas Rare Earths (LYSDY) the eighth pick in my Special Report: 9 Picks to Make Money in This Bear Market and said that I would add it to the Jubak Picks Portfolio today. This is what I wrote in my Special Report: “This isn’t a Fed pick, an economic growth pick, or a Bear Market bottom pick. It’s a straightforward U.S.-China trade war pick

After the market close on October 5, Costco Wholesale (COST) reported that sales for September had climbed 10.1% to $21.46 billion. Total same-store sales rose 8.5% in September, beating Wall Street’s estimate of 6.3% growth.

I added Freyr Battery to my 10 Perfect Stock Special Report today. Tomorrow I’m adding the stock to my Jubak Picks Portfolio with a target price of $21 a share. This is what I wrote about Freyr in my Special Report.

Costco demonstrates strength in a very tough environment; keeping it as a portfolio pick

Shares of Costco Wholesale closed up 2.98% on September 26. The advance against the grain of a generally down market comes after the company announced a beat on both revenue and earnings for its fiscal fourth quarter on Thursday, September 22.

Futures markets suggest down start for week on Monday

Asian traders bid down futures for Japanese stocks by almost 2% and by 1.5% for Australian stocks ahead of the Monday opening of New York markets. On Friday, after a hawkish speech on interest rates and inflation by Federal Reserve chair Jerome Powell the Standard & Poor’s 500 lost 3.37%.