Do the huge January job gains mean that the Federal Reserve will raise interest rates to a higher peak? That was the worry today and it was enough to send the Standard & Poor’s 500 0.61% lower at the close and to knock a solid 1% off the NASDAQ Composite. The NASDAQ 100 fell 0.87% and the small-cap Russell 2000 lost 1.40%. 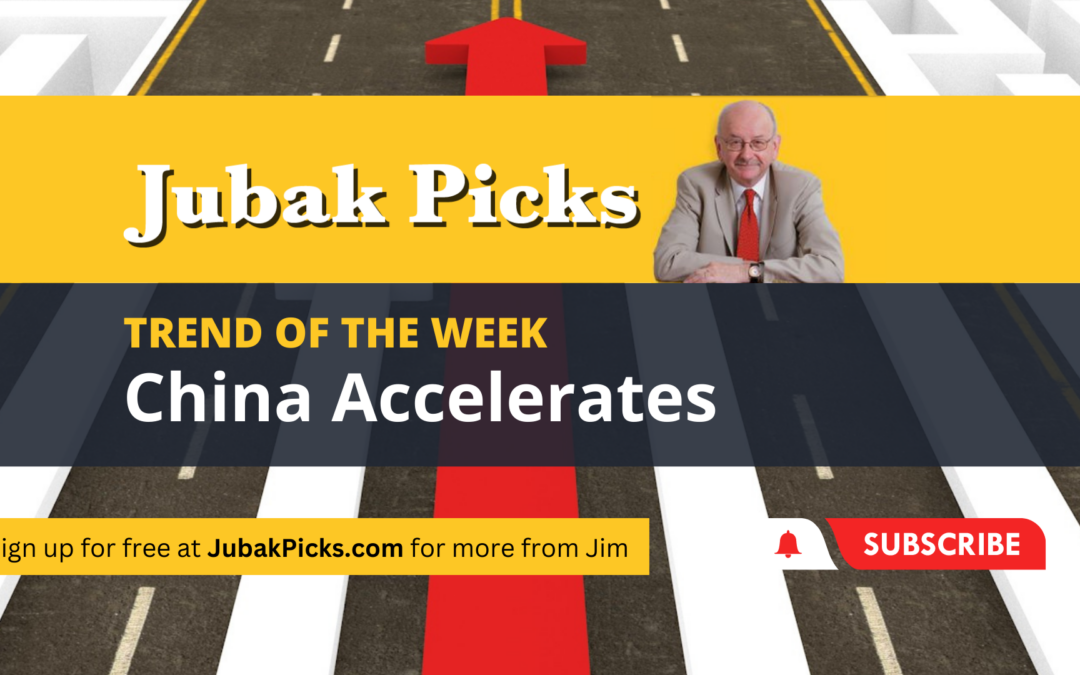 Today I posted my two-hundred-and-thirty-third YouTube video: Trend of the Week China Accelerates This week’s Trend of the Week: China Accelerates. There is a horrific death toll in China as the country’s COVID policy changed dramatically, allowing COVID cases to surge wildly, spreading throughout the country and killing possibly a million people, but ultimately resulting (everyone hopes) in immunity. Now, Bloomberg is seeing a pick-up in China’s manufacturing activity and predicts 5.8% GDP growth in 2023, a huge bump from 3% in 2022. You can see this upswing by looking at the iShares China Large-Cap ETF (Nasdaq: FXI) as the market anticipates this GDP growth and a likely stimulus from the People’s Bank of China to make up for problems relating to the COVID crash. The iShares MSCI Emerging Markets ETF (EEM), which is an ETF that tracks at emerging markets as a whole and is heavily influenced by China, is also back on the upswing. I had been shorting EEM as China’s economy was dragging markets down, but I’ll be ending that short now. The bad thing about China being back is that it will start exporting inflation to the global economy, likely to the tune of about 100 basis points. Whether or not this will change the Fed’s timeline for pausing interest rates is unclear at this point. We can expect higher commodity prices, energy prices, and eventually, consumer prices as China continues its upswing. To follow more ETFs, go to my paysite, JubakAM.com.

Russia’s tax revenues from oil and gas plunged 46% in January. A price cap on oil exports imposed by Western allies, combined with a 59% increase in spending largely thanks to the war in Ukraine, the drop pushed the deficit for the month to 1.76 trillion rubles ($25 billion), the Finance Ministry said. That’s the worst start to a budget year since 1998.

Eurozone retail sales dropped by 2.7% in December from a month earlier. November retail sales rose 1.2% from October. Economists were looking for a 2.4% month-to-month drop in December so these results were worse than expected. (The EuroZone figures are adjusted for inflation.) Retail sales decreased by 2.8% in December of 2022 on a year-over-year basis.

Will Powell take it all back on Tuesday?

Was it accidental or intentional? We’ll find out on Tuesday when Fed chair Jerome Powell answers questions at the Economics Club in Washington. On Wednesday, February 1, in his post-Fed-meeting remarks, Powell came across as more dovish on inflation and interest rates than many Wall Street strategists and the financial markets had expected.

After a big week of tech earnings news, stocks and investors will move onto fourth quarter 2022 earnings for consumer stocks, health care, and a little taste of fintech.

Today, Friday, February 3, the Bureau of Labor Statistics reported that the U.S. economy added a whopping 517,000 jobs in January. Economists had been expecting more along the lines f 50,000 jobs added in the month. The huge January surge took the headline unemployment rate to 3.4% The last time the unemployment rate was this low was May 1969. On the surface, the stronger, the much stronger, than expected job gain in January will put pressure on the Federal Reserve to continue raising interest rates. If the labor market is booming, it’s hard o see inflation coming down rapidly. But the real story here may be beneath the surface. 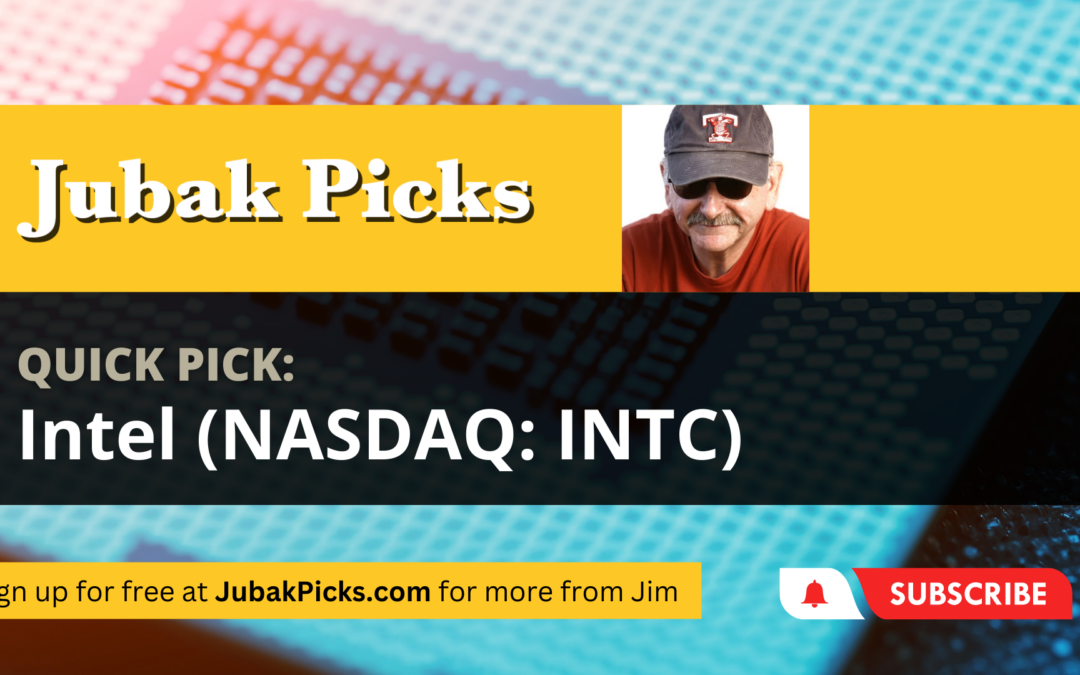 Today I posted my two-hundred-and-thirty-second YouTube video: Quick Pick Intel Today’s Quick Pick: Intel (NASDAQ: INTC). Intel’s revenue and earnings report last week was terrible. It was a classic kitchen sink quarter, where the company laid out all the bad news at once, so investors only have positive things to look forward to. The stock was trading at $28 on January 31, and the 52-week range is $52.5 – $24, so we’re currently pretty close to the bottom of the range. The 2022 loss is a little over 38% but year to date, even with all of this bad news, the stock is actually up 5.75. If you have a longer time range, this is the time to buy Intel. We’re close to a bottom here and their plans going forward include new chips and, in 2024, new technology that can really compete with AMD. Additionally, Intel’s fab business, where they manufacture chips designed by other companies, went up about 30%. They are one of the few companies left that are actually manufacturing the chips, (their biggest competitor being Taiwan Semiconductors.) As Intel improves its own technology, its fab business will grow and become more appealing to chip designers. As long as Intel hits its projected milestones throughout 2023, this is a good buy for 2024.

Special Report: How to Save Your Retirement Portfolio Even If You’re Over 50

It’s been a tough market–and a tough decade looms– but taking smart risks using this strategy can save your retirement portfolio even if you’re over 50. You can do it if you take some risk. Some smart risk. Emphasis on the “smart.” The goal is to find a way to get some extra upside return while keeping your potential downside losses to a minimum. And here are my 10 picks for starting a Save Your Retirement Portfolio. 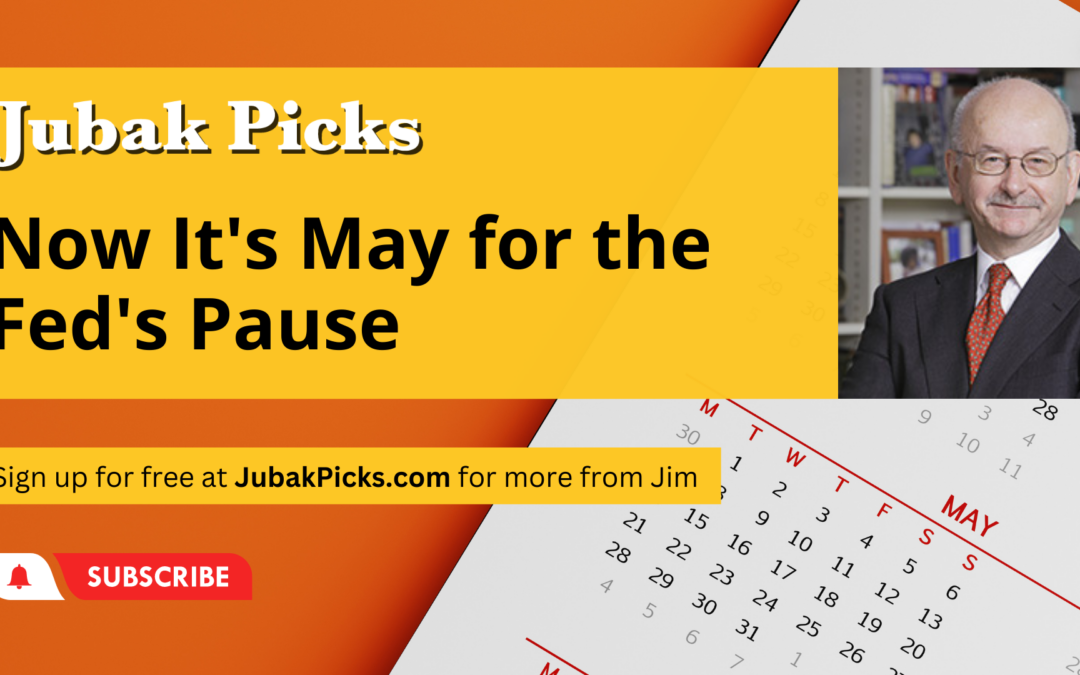 Please Watch My YouTube Video: Now It’s May for the Fed’s Pause

Today I posted my two-hundred-and-thirty-first YouTube video: Now It’s May for the Fed’s Pause Today’s topic is: Now It’s May for the Fed’s Pause. There wasn’t a lot of suspense about today’s Fed meeting. The CME FedWatch chart, which measures what investors think the Fed is going to do, had a 25 basis point raise at 98% odds– meaning 98% of investors believed that is what the Fed will do–before the Fed meeting. The other 1.8% believed the Fed won’t raise rates at all. So no one was expecting a 50 basis point rise. And the Fed didn’t disappoint the financial markets. The central bank delivered the expected 25 basis point increase. So now we’re asking, when will the Fed pause the rate increases? We’ll be getting the next update and Dot Plot set of projections from the Fed on March 22, when many expect another small raise, but also a signal that the central bank will stop raising rates by the following meeting on May 3. The March 22 meeting will give us an update on the Fed’s projections for a peak interest rate. I:n December the Fed looked like it was projecting a peak of slightly over 5%. The market is now expecting a peak of below 5%. Look to the March meeting to see if those projections get closer together or further apart.

Fed raises interest rates by 25 basis points as expected; market convinces itself that the Fed is talking “Pause soon”

The Federal Reserve raised short-term interest rates Wednesday by 25 basis points, as expected. That brings the Fed’s benchmark interest rate to a range of 4.50% to 4.75%, the highest level since October 2007. After a pullback on the news and the Fed’s press release, the stock market advanced because in his press conference Fed chair Jerome Powell didn’t strongly push back on questions suggesting that the Fed sees inflation continuing to fall and that the central bank is nearing a pause in its interest rate increases. If you’re familiar with the way that financial markets torture the Fed’s frequently opaque language to support the current consensus, you won’t be surprised that today’s move up on stocks is based on a very minor shift in the Fed’s language. 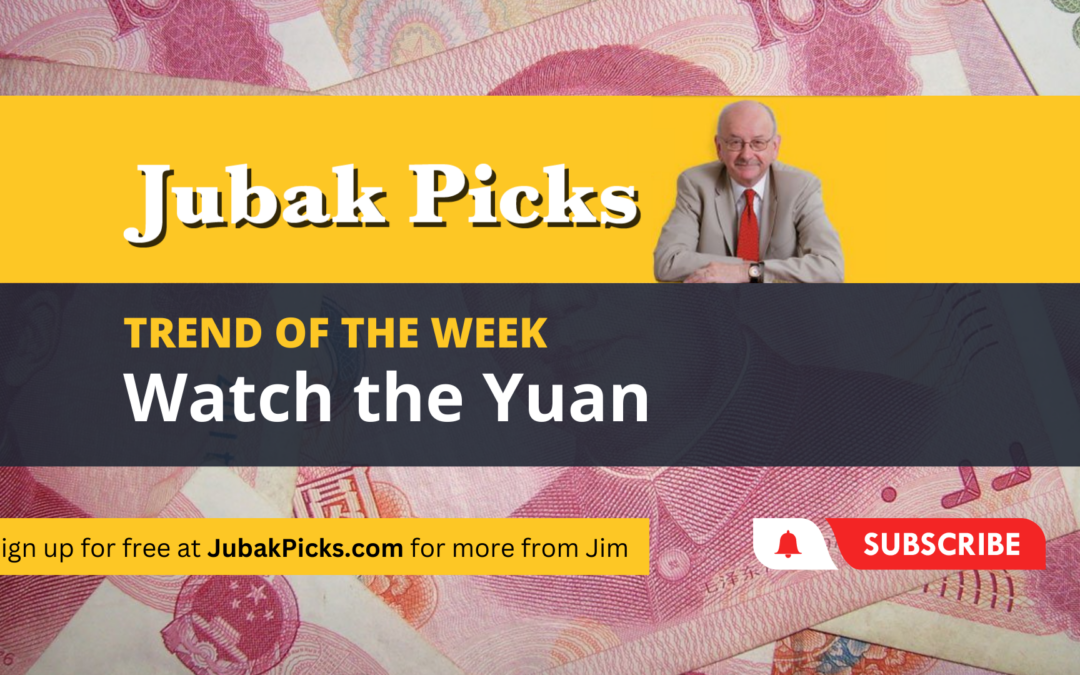 Please Watch My New YouTube Video: Trend of the Week Watch the Yuan

Today I posted my two-hundred-and-thirtieth YouTube video: Trend of the Week Watch the Yuan. This week’s Trend of the Week: Watch the Yuan. China controls one of the two largest treasury portfolios in the world, and the strength of the yuan affects treasuries worldwide. Right now, the yuan is under pressure from many different sources that I’m not sure the market is taking into account. China’s battle with high rates of COVID has left the Chinese government with two choices: either let the yuan fall and import inflation, or spend money to support the yuan causing inflation problems on the other end. It’s clear to me that China will provide stimulus to counteract the slowing economy from the COVID outbreak, which will put added pressure on the yuan. Additionally, as Russia tries to make up for losses in its oil exports, it really only has one option: sell from its huge currency reserve. Due to global sanctions, the only currency it can trade is the yuan. Expect to see Russia selling off its yuan to buy rubles in order to support its own currency. All these factors are putting pressure on the yuan. There’s a lot to watch in global currencies right now, including strange things happening with the yen in Japan and the dollar under pressure as the U.S. faces the debt ceiling crisis. Keep an eye on the Treasury market.